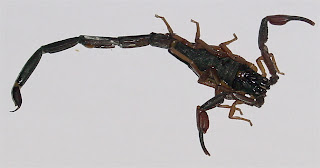 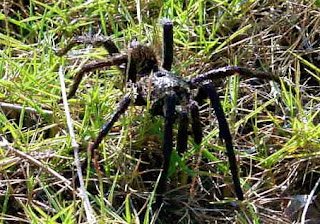 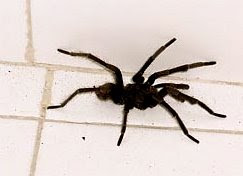 CubaNews posted an interesting Prensa Latina story today saying that the number of scorpions raised on one of Cuba's big ol' scorpion ranches has jumped to 4,000, from 500, since the beginning of 2008.
In August, Havana Radio reported:

Scorpion toxin is becoming increasingly popular in the treatment of cancer and other serious illnesses in Cuba. So far it has been used on nearly 5,000 Cuban patients and 3,000 foreigners.

All this is good news. It means I won't get cancer of the toe. That's where a scorpion zapped me one night while I was at home in Tarara, east of Havana. It was about 10:30 or so at night. I was walking across the room and I guess I stepped on the little guy, so naturally he stuck me.
I grabbed a sandal and turned it into a scorpion pancake.
I also came across a lot of big spiders while in Tarara. But they never chomped on my toe, so I didn't have to flatten any of them.
Posted by alongthemalecon at 8:25:00 PM