Beware of that sinister cheese, Yoani

Yoani Sanchez, the award-winning creator of the Generación Y blog, says police have summoned her and her husband, Reinaldo, for questioning.

It's not immediately clear why. Sanchez writes:

I swear that I have not ran a red light, that I have not bought cheese on the black market in more then two months and I have not left a store without paying. I don't remember violating the laws -too much- these days. I have not even pretended to be a foreigner in order to use the Internet in some hotel.

I have, nevertheless, been called into the police station along with Reinaldo. We are to go down to the Police station at 21st and C in Vedado. I wonder if I should take my toothbrush or will I just receive a brief ear tug.

I leave you with the official document I received today from the hands of a sweaty official who had to go up 14 flights of stairs -I've had no elevator for a month.

She wrote that she and Reinaldo were to report to the police station today at 9 a.m. and she expected to have some news after 2 p.m. today. 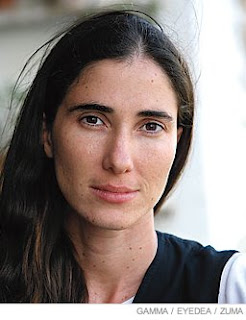 This photo of Sanchez, above, is from Time magazine, which named her one of the World's Most Influential People in 2008
No doubt, much of the blogosphere will get behind Sanchez and try to pressure Cuban authorities to leave Sanchez alone. Given her international support, I am not sure it makes sense for the Cuban government to pick a fight with her - not that Cuban authorities always take international opinion into account.

When the profane punk rocker Gorki was thrown into summoned to jail earlier this year, the blogosphere's reaction was strong and immediate. If authorities put Sanchez in jail, I'm sure that the reaction would be much stronger and more widespread.

If Cuban authorities jail Sanchez, that would tell other bloggers, along with dissidents and independent journalists, that no one is safe and that the Cuban government cares more about maintaining control than in improving its image when it comes to human rights and freedom of expression.
Jailing Sanchez would also send the wrong signals weeks before the inauguration of Barack Obama, who has promised to take a different approach to Cuba. 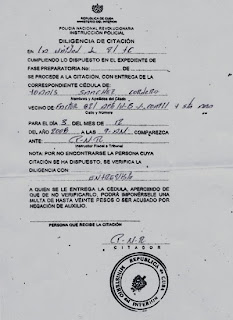 This is the document Sanchez said she received asking her to appear for questioning.

We'll see what happens. I'd be surprised if authorities jailed Sanchez right now.
P.S. Something Sanchez ought to know: There actually is a Web site on illicit cheese. The Cheese Enforcement Agency declares:

Illegal cheese. It's just not worth it. 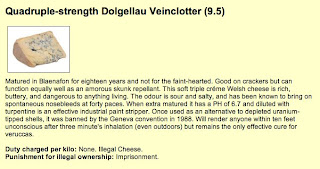 I have to correct something. The "punk rocker" Gorki was never in prison. He was summoned to a trial, where he was released on a small fine. I remember this blogger Yoani crying foul today was one of those telling us all about how Gorki's summons was evidence of Cuban artistic repression. Really it was about loud music. Now we are told what to believe about this meeting that took place in a Vedado police station. What I think the Cuban people deserve to know is who, in Miami and Washington, has Yoani been working with (a "conference" of dissidents is an old US Interests Section invention). If she is not working with someone organizing counter-revolution I will be the first to apologize and condemn the Government. Unfortunately I have watched the Cuban Government's intelligence be correct almost all the time in situations like this.

leftside,
Yeah, you're right about Gorki. Thanks for pointing out that mistake. I'll correct it.