Strange. Yesterday I was skimming through my blogroll, stopped at CUBAPOLIDATA and read an interesting PDF called, A NEW FIDELITY: THE SUPPORTING ROLE OF USSOUTHCOM IN A POST-CASTRO CUBA.
Then today I check back with CUBAPOLIDATA and find an entry called "asian male dating black female." Click on that - because how can you resist? - and there's a picture of a naked guy on the ground with someone, also naked, described as a "slutty granny."
Very peculiar. So did someone hack the blog? And not to be too much of a conspiracy theorist, but was it because of the SOUTHCOM PDF? You can read a copy of that here without having to endure the granny.

Update: Armando F. Mastrapa 3d of CUBAPOLIDATA reports that wi-fi sniffers left the offensive post, which has been removed. 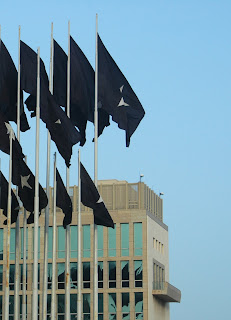 LT SARAH C. RHOADS, USN, submitted the paper to the Naval War College faculty as part of some requirement of the Joint Military Operations Department. As I read it, it occurred to me that hundreds and hundreds of U.S. government workers and contractors are relying on Cuba for their current or future employment.
A summary Rhoads' paper says:

Although the Communist Party has a cadre of loyal supporters throughout the country, the passing of the Castro brothers will provide the United States an opportunity to aid in the democratization of Cuba. An effective way for this to happen is proper coordination of joint, combined, and interagency efforts.

The U.S. military, especially the United States Southern Command (USSOUTHCOM), will play a crucial supporting role to the Department of State. The key to success in this supporting role is a well defined Cuba Theater of Operations (CTO) command construct with a robust Combined Joint Interagency Coordination Group (CJIACG). 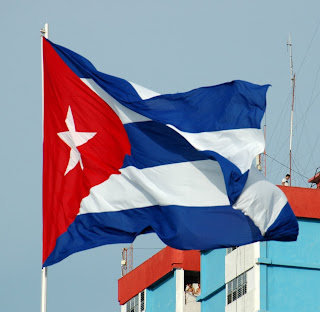 I'm really concerned about the term "theater of operations" that usually indicates a battlefield or a geogriphical location in a great theater of war.

And then it's followed by "peaceful transition to Cuban democracy."

Does strike anyone else as odd?

Yeah, you've got a point. How does it go from theater of operations to peaceful transition.
I also wonder if some U.S. agencies will follow through with plans for Cuba just because of momentum. The thinking is that, well, these plans have been in place for years and so they've got to be carried out.
All this planning goes on in the U.S. yet there has not been any dialogue between the two governments.

In the process of upgrading to WordPress 2.7, while using a friend’s laptop, which I now realize was not wi-fi secured, two explicit posts were made to the site by a wi-fi sniffer. My apologies for the offensive materials that were posted.

Armando,
Ah, the mystery is resolved. Those wi-fi sniffers are something else. Best, Tracey.
P.S. I enjoy your site. You're always finding interesting material.

I was disappointed to see the Cubapolidata blog hacked like that. It's definitely something I worry about, and probably all bloggers worry about.

Yet, it should also be of interest to readers that American public opinion does not strongly favor the role of the military as a democratizing force. Instead, Americans favor cooperative and diplomatic methods to spread democracy, such as through the United Nations.

Researchers at PIPA have compiled opinions of Americans on this subject, and while attitudes are complex, there's good support for finding a cooperative approach.

If one seriously considers these polling results, and really wants democracy for Cuba, then why wait after Fidel and Raul Castro are gone? Americans favor methods of cooperation, just like the policy that has been approached by virtually the rest of the world.

The US should try another policy, it doesn't have much to lose. It definitely won't lose the support of the American public.

I've always wondered what would happen if the U.S. lifted all economic sanctions and began promoting the idea of national reconciliation. I've mentioned that to some people who wish the CIA had succeeded in knocking off Fidel Castro and they hate the idea. But I can't help but wonder.