Backgrounder on the Cuban Revolution

Fidel Alejandro Castro Ruz was born on Aug. 13, 1926, and grew up on a sprawling plantation near the town of Birán in eastern Cuba.
His father, Ángel Castro y Argis, was from the northern Spanish province of Galicia and journeyed to Cuba as a 13-year-old orphan at the time of the Spanish-American War. His mother, Lina Ruz González, was a household servant.
Rebellious as a child, Castro went to Jesuit schools before enrolling at the University of Havana, where he was a student leader.
He studied law at the University of Havana and began practicing in 1950. He vowed to help the poor and was soon caught up in political causes aimed at toppling then-dictator Fulgencio Batista.
On July 26, 1953, Castro led a disastrous attack on the Moncada Barracks in Santiago de Cuba. Half the rebels were killed and Castro was thrown in jail. 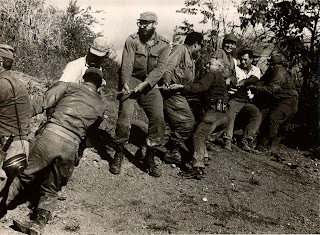 At his trial, Castro issued a scathing denunciation of the Batista regime. His speech – “History Will Absolve Me” – became the manifesto of the revolution and captivated the public, weary of the corrupt, violent Batista regime.
He and his brother Raúl were found guilty and sentenced to 13 years in prison. Their supporters pushed for amnesty, and the brothers were freed on May 16, 1955, less than two years after the Moncada assault.
With Moncada behind them, the Castro brothers traveled to Mexico to reorganize and raise money. During one fund-raising venture, Fidel Castro swam across the Rio Grande and met secretly with a Batista foe in McAllen, Texas.
Argentine revolutionary Ernesto “Che” Guevara soon joined the cause and the rebels returned to Cuba aboard a yacht called Granma in December 1955.
Eighty-one of the fighters landed ashore that month. Batista’s soldiers killed all but 12.
Still, Fidel Castro’s faith never wavered, biographers say. At one point, the Cuban leader and two other rebels crouched in a sugar-cane field hiding from soldiers. They had only two rifles and had no idea if any of the other insurgents had survived.
Undeterred, Fidel Castro whispered to a fellow rebel, “We are winning. Victory will be ours!''
The Cuban leader’s “courage is so great it borders on the insane,” the late Castro biographer Tad Szulc wrote. 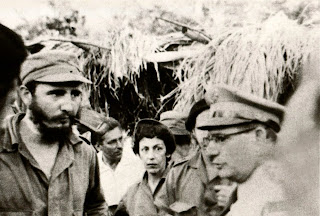 After their arrival, Castro and the other surviving rebels headed for the Sierra Maestra, an eastern mountain range, and waged a quixotic guerrilla war against Batista’s U.S.-supplied army of more than 10,000 soldiers.
On May 20, 1958, Batista launched Operation FF - Fin de Fidel or End of Fidel. It was an all-out, 76-day campaign to kill the guerrilla leader. But it failed and by year's end, Batista had fled Cuba and Fidel Castro declared victory on Jan. 1, 1959.
"For the first time the republic will be entirely free," the rebel leader said the next day.
- Tracey Eaton
Note: I don't have any photo credit information. If anyone knows who took the pictures, I'd love to add it. These are archive pictures I scanned while in Cuba.
Posted by alongthemalecon at 6:43:00 PM

This comment arrived via e-mail from Ron Ridenour, an American author in Denmark. Thank you. Tracey.

Attractive and accessible blog. You paint, to my eyes, an accurate portrayal of Fidel and of the Cuban revolutionary process, and you do so with a respectful tone, nor do you lack joy.