Cuban-Americans can start packing their bags 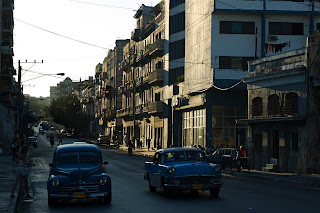 Sen. John Barrasso, R-Wy, asked Hillary Clinton about Cuba during her confirmation hearing today. Clinton said Obama will lift travel restrictions for Cuban-Americans, then continue to press for a democratic opening in Cuba, the release of political prisoners and other changes. That would essentially return U.S. policy to the pre-shoot-down days of the Clinton administration. And the ball would be in Cuba's court.

Here's what Hillary Clinton told Barrasso, according to this NY Times transcript:

Senator, the president-elect is committed to lifting the family travel restrictions and the remittance restrictions. He believes, and I think it's a very wise insight, that Cuban-Americans are the best ambassadors for democracy, freedom and a free market economy.

You know, our policy is, first and foremost, about the freedom of the Cuban people and the bringing of democracy to the island of Cuba. We hope that the regime in Cuba, both Fidel and Raul Castro, will see this new administration as an opportunity to change some of their typical approaches.

Let those political prisoners out. Be willing to, you know, open up the economy...But that's in the future, whether or not they decide to make those changes.