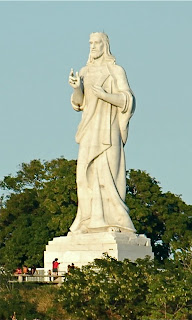 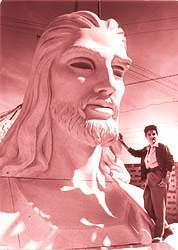 Vilma Madera. Photo credit unknown.
The woman who created the Christ statue seen across the Bay of Havana saw her masterpiece unveiled on Christmas Day 1958, just days before Fidel Castro declared victory and took power.
A sculpting contest was held in 1956 to pick someone to create a Christ statue. Vilma Madera Valiente won, beating all the men in the competition. Nationmaster describes her statue as the world's largest free-standing sculpture made by a woman.
Madera journeyed to Italy for the marble. She cut it there and Pope Pius XII blessed it, Wikipedia says. The statue was sent to Cuba by ship in 67 pieces (one version says 77 pieces).
The Christ statue is a fabulous piece of art. It stands in a suburb of Havana called Casablanca. It is 66 feet high and weighs 320 tons. 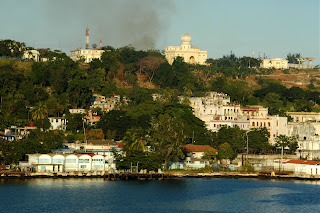 View of Casablanca
Other notable work by Madera includes a bust of Jose Marti at Turquino Peak in eastern Cuba. I also read she created a death mask of Franklin Delano Roosevelt, but I haven't found much detail about that.
FDR was born Jan. 30, 1882 - exactly 127 years ago. Madera was born decades later, in 1915 in Pinar del Rio. She died in 2000 at 85, according to this article in Spanish.
Posted by alongthemalecon at 5:48:00 AM