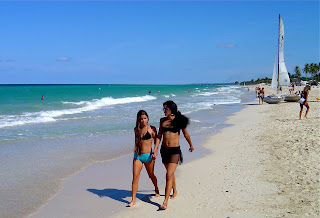 Just about every time I climbed into a taxi or met someone on the streets while in Cuba recently, the conversation turned to Barack Obama.
The questions were invariably the same: Do you think Obama will make a change in U.S.-Cuba relations? Will he make it easier to travel and send money to Cuba? Will he loosen the embargo?
All this is fascinating: The U.S. and Cuban governments have been bitter enemies for more than a half century. And now, many Cubans are looking to an American, to Barack Obama, as a source of hope that their lives will improve.
There are incredibly high expectations for the next president of the United States, not just in the U.S., but in Cuba and, I expect, many parts of the world.
Posted by alongthemalecon at 6:11:00 AM