A different father: Possible reason why Raul Castro does not resemble his older brother, Fidel 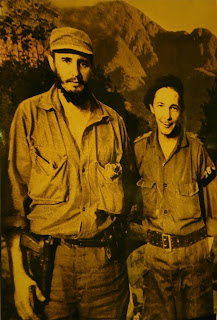 Fidel and Raul obviously have many physical differences. A number of authors - including Brian Latell, Norberto Fuentes and Ann Louise Bardach - have written that Fidel and Raul may have different fathers.
Fidel's father was Angel Alejandro Castro Ruz. That is clear. The authors say they believe Raul's father may have been Felipe Miraval, a chief of the Rural Guard where the Castro family lived. Miraval, nicknamed "El Chino," or The Chinaman, did not have a lot of facial hair. Nor was he particularly tall, a trait he could have passed along to his son.
I don't know if that theory is true or not, but Fidel and Raul Castro do look different, as shown in this photo, which hangs in Havana's Hotel Nacional.
Posted by alongthemalecon at 2:49:00 PM

Wow. They do look different in that picture. I would also say their personalities are very different too.

Fidel has Spanish blood which makes (made) him firey. Raul is mild mannered more like Chinese characteristics.

I would like to see this researched more. I had never heard of this comparison.

the picture is a little distorted because I shot it from the left side. that might make fidel look a tad bigger than he is. but for sure they have different characteristics. Brian Latell's book, After Fidel, has the best analysis of the two brothers I have seen.

I was just going to say that "After Fidel" makes a VERY compelling case for what you just wrote.

I happen to agree completely.

The fascinating thing for me is that it never seemed to make a difference to Fidel, who seemed to have created his entire adolescent personality from a desire to demand acknowledgment of his place in the family from his father.

After Fidel is very well researched. Brian Latell tracked down key primary sources and interviewed them in person. It's an impressive book.
I agree with you that the psychology of Fidel is fascinating. I'd like to know more about the relationship between the two brothers now - how much they communicate, what they say, how much influence Fidel still has at this point, what relations are like between their families, etc.