El Túnel: One of the seven wonders of Cuban engineering 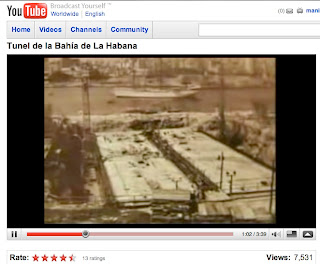 I bought a used Sony video camera on eBay and erased what was on it - some Asian guy's family vacation. Then I started experimenting with the camera during my recent trip to Cuba.
I shot high-definition video of everything from car mechanics and transvestites to Raul Castro and the relatives of Cuban prisoners. My video is the usual wobbly amateur stuff. But what the heck, in the weeks and months to come, I'll put some of it on the Web anyway, adding even more junk to the blogosphere.
Below is a clip of about a minute showing Havana's famous tunnel, which allows travelers to cross the Bay of Havana.
A French company, Grands Travaux de Marseilles, along with Cuban engineer Jose Menendez Menendez, built the tunnel. Work began in September 1955 and the tunnel opened on May 25, 1958. The cost: nearly $30 million - or more than $350 million in today's dollars.
When I moved to Cuba in 2000, the tunnel was undergoing repairs and so I often took the long way around when traveling from my home in Tarara to my office in Old Havana. It takes about a minute to go through the tunnel. Going around the bay adds a half hour to the trip if you're traveling to Playa del Este, for instance.
Back in 2000, I remember hearing rumors that the 2,419-foot tunnel had been leaking. A man who worked on the original tunnel told me the Cuban government had turned to France to help repair it.
A consortium of Cuban and French companies began repairing the tunnel in May 2000 as part of a $6 million project, according to the U.S.-Cuba Trade and Economic Council in New York. Repairs took at least a year, I recall.
Cuba's Society of Civil Engineers considers the tunnel one of the country's seven wonders of civil engineering. Tania Quintero describes the seven feats of engineering in this post on Penultimos Dias. Another source of information is this YouTube video, which outlines the tunnel's history. A photo and map are here.
Posted by alongthemalecon at 11:43:00 AM

yeah it was leaking. we traveled many times on hershey electric train. for many years was the only option to go from havana to matanzas and many villages in between. my last horse was killed by one of them in the interception of the train track and guanabo old road [agromar neighborhood].
kids over there put bottle cap on the bars track to get it flat and sharp.

It's slippery in there, too. Motorcycles aren't allowed to go through the tunnel unless they have sidecars.