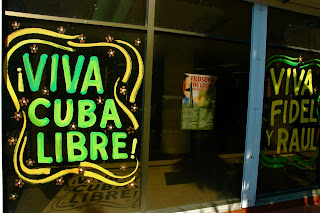 He's baaaaack. Cuban President Fidel Castro resurfaced Wednesday for a meeting with Argentine President Cristina Fernandez.
"I was with Fidel about an hour or more," the Associated Press quoted Fernandez as saying. "We were chatting, conversing. He looked good."
Fernandez said Castro told her he "had followed the inauguration of Barack Obama very closely, that he had watched the inauguration on television all day. He had a very good perception of President Obama."
Castro described Obama as "a man who seems absolutely sincere," someone who believes in his ideas "and who hopefully can carry them out."
Raul Castro on Wednesday also talked to reporters, saying he wanted to "liquidate" rumors that Fidel was not well.
"Do you think if he were gravely ill I'd be here laughing?" he asked. "Soon I'm going to travel to Europe. Do you think I could leave here if Fidel was seriously ill."
Fidel is "doing his exercises, thinking a lot, reading a lot, advising me and helping," Raul said. 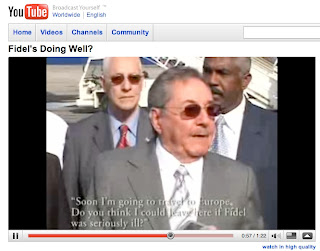 Here's a CBS YouTube showing the remarks of the Argentine and Cuban presidents.
Fidel Castro had been silent since mid-December, prompting much speculation over his health. I joined with others in speculating that Castro's health had perhaps taken a turn for the worse. All that speculation was evidently off target. And now Fidel Castro is probably chuckling about it, saying, "Idiot journalists."
I will always wonder why we heard nothing from Fidel for more than a month during such important moments as the 50th anniversary of the Cuban revolution.
Maybe he really was sick or undergoing some special medical treatment. Or maybe there was some strategic reason behind his silence. Or maybe something else is going on. But I see now that this kind of speculation is useless when so few facts are known.
Geez, I'm sure glad I didn't write a whole book about all this.
Update: Fidel Castro has also written another "Reflection," as his essays are called. He writes about his visit with Cristina Fernandez and refers to the inauguration of Barack Obama. He also writes of 10 successive U.S. administrations that "in spite of their immense power have not been able to destroy the Cuban revolution." 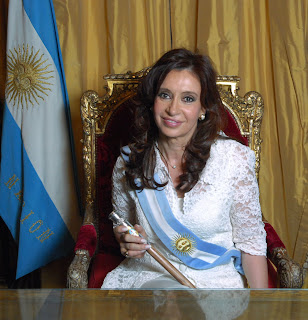