Fidel Castro: Grandfather of the revolution 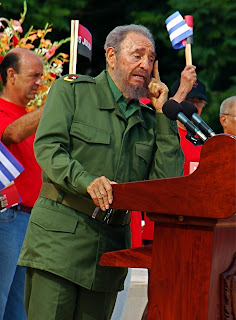 “A tough old bird,” is how one American diplomat once described Fidel Castro. But signs of mortality began creeping into view in 2001.
In June of that year, Castro fainted two hours into a speech under the sweltering sun. He recovered, took his own pulse and decided he was well enough to go back on stage. But by then, his bodyguards had piled him into an emergency vehicle.
“I was fighting for them to let me go,” Castro said later. “I had to exercise a little bit of my authority. I said, ‘I'll cooperate with you, but you cooperate with me.’”
After the fainting spell, Castro began sprinkling speeches with light-hearted comments and jokes about his eventual demise. But Cuban authorities continued to conceal most details of his health, calling it a state secret, a matter of national security.
The CIA has speculated that Castro had Parkinson's disease.
Castro rejected that, but said he didn't care if he had that illness, saying, “The Pope had Parkinson's, and he spent a bunch of years running all around the world.”
In January 2004, Bogota Mayor Luis Eduardo Garzón met with Castro and said he appeared “very sick.”
Castro's physician, Eugenio Selman Housein, denied that a few months later and predicted the Cuban leader would live to be 140 years old.
In October 2004, Castro tripped and fell after a speech, shattering his kneecap and breaking his right arm. But he recovered quickly, walking in public just two months after his fall.
On July 31, 2006, the Cuban government said Castro's duties as president had been transferred to his younger brother Raúl while he underwent surgery to address “an acute intestinal crisis, with sustained bleeding.” 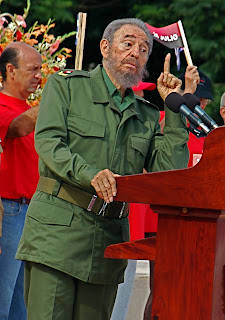 Less than a week later, the Brazilian newspaper Folha de Sao Paulo said Castro had intestinal cancer and would be unable to resume power.
Castro's first statements after undergoing surgery fueled the speculation that he had some kind of terminal disease.
“I ask you all to be optimistic, and at the same time to be ready to face any adverse news,” he said in a Aug. 13, 2006, statement. “For all those who care about my health, I promise I'll fight for it.”
American doctors had speculated that Castro had cancer of the pancreas, stomach or colon. And Folha de Sao Paulo reported that cancer had forced doctors to remove some of Castro's intestines.
On Sept. 6, 2006, Castro said, “This is still serious. We're out of the woods, but don't expect me to walking around in my fatigues any time soon. Other people are running the show now, but I'm still here as the grandfather of the revolution.”
“We all must also understand, with realism, that the duration of a complete recovery, whether we want it or not, will be prolonged. At this moment, I am not in any hurry, and no one should hurry.
“The country marches on well and moves ahead.”
Raul Castro was named president in February 2008. Fidel Castro remains first secretary of Cuba’s Communist Party. And although he has not appeared in public since July 2006, he has met with some foreign dignitaries, including Venezuelan President Hugo Chavez.
- Tracey Eaton
Posted by alongthemalecon at 12:16:00 PM