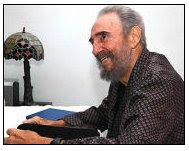 Prensa Latina photo
Fidel Castro has written another column, this time telling Cuban government and party officials tonight not to be influenced by what he writes or by his illness or his eventual death.
Explaining his silence of more than a month, he said he slowed the pace of his Reflections, as his columns are called, because he didn't want to "interfere with or obstruct" the difficult decisions that Cuban officials must make, particularly in light of the global economic crisis.

He said he has been immersed in the affairs of his country for more than a half century, but didn't expect to be involved forever.

I have had the rare privilege of witnessing the events for this long... I do not expect I shall enjoy such privilege within four years, when Obama's first presidential term has been completed.

Castro also praised Barack Obama in the column, which appeared in Prensa Latina with an undated photo of Castro, above.
Notes: I am using Cuban Colada's translation, which is more accurate than my initial quickie version.
Mambi Watch has a good summary of all the hysteria and uncertainty over Castro's health.
Posted by alongthemalecon at 9:20:00 PM