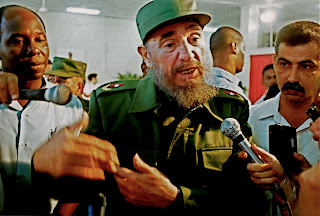 Stern, beefy guys in guayaberas usually surround Fidel Castro at press appearances. I get a kick out of seeing Castro's official photographer, in the background in the green military cap just to the left of the comandante's right shoulder. The reason: He carries a camera and packs a pistol.

Cuba's Ministry of the Interior has reportedly called in special military forces to safeguard top government officials "just in case," according to the University of Miami's Andy Gomez, an advisor to the U.S. Task Force on Cuba.
Gomez cites as his source of information "high level sources” in Washington, D.C., according to the Miami Herald's Cuban Colada on Jan. 15, and in Ninety Miles today.
I have no information on whether the report is true or not. Top officials have many layers of security, depending on the circumstances. There may be nothing unusual going on.
But people on both sides of the Florida Straits have been a little jittery lately over Fidel Castro's health. Rumors have been flying that his condition has worsened. I asked a Havana source about Fidel last week. She said the news out of Florida is tinged with a sense of urgency and some hope that Castro is finally down and out. "Wishful thinking," she called it.

Information rains down, especially in Miami. He is sick, there is no mystery. The news so far is more like wishful thinking.

He once said in a speech that when he dies, as we all will one day, no one will believe it.

Anyway, back on the subject of security - I've been impressed with the sophistication of Cuba's security forces, whether it's customs agents at the airport or workers on security detail at speeches and other events, particularly when Fidel or Raul Castro are attending.
I was at a reception some years ago for American business people and Fidel Castro showed up. His security personnel formed a tight circle around Fidel and shielded him as he moved through the reception. One or two or three people would be allowed to enter the circle at a time to talk to Fidel. So even though the reception was packed, Fidel was unmolested, free to chat away with his guests.
Cuban officials also take strong security measures to screen reporters and photographers at big events. Journalists typically leave their belongings - cameras, laptops, day packs, purses - in a room and security personnel then go in with trained dogs and examine everything. The process can take several hours.
The first time I witnessed the procedure was in 1994 before a military parade that Fidel Castro attended. As I recall, I had a lot of money in my camera bag. I don't remember how much, maybe $500 or $600. I wasn't familiar with the routine and all the sudden I was separated from my bag - and the money. The door closed and security personnel were free to do whatever they wanted with journalists' belongings.
They had to have seen the fresh $100 bills, but left them intact. I'm sure they had other things on their mind.
Posted by alongthemalecon at 7:34:00 AM