The legacy of Fidel Castro 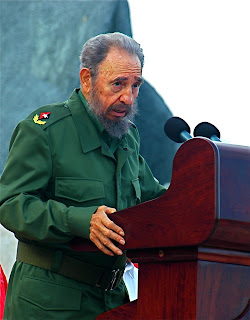 Fidel Castro's last public appearance on July 26, 2006
Fidel Castro, a remarkable political survivor who defied 10 American presidents and thrust Cuba into the world spotlight, has been out of public view for nearly 30 months now.
His foes in Miami are once again planning a celebration of his death. Castro supporters in Havana, meantime, say he’s still alive, though details of his health remain a state secret.
What’s certain is that Castro, a titan of the Cold War, will leave a legacy that will be hotly debated in the years to come.
For five decades, he tried to turn Cuba into a communist utopia, a place of social justice and equality. His government produced tens of thousands of teachers and doctors and some of the lowest illiteracy and infant mortality rates in the Western hemisphere. But the island has not shaken its dependence on foreign dollars and economic conditions remain grim for most Cubans.
Unapologetic, Castro, 82, has defended his version of tropical socialism even as his brother, Raul Castro, struggles to boost the island’s economy.
"The ideas for which I have fought all my life will not die," Fidel Castro said before taking ill in 2006. "They will live on."
Castro took power on Jan. 1, 1959. 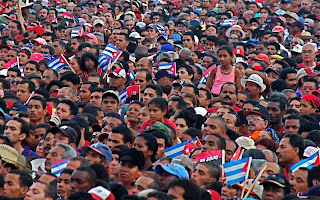 Cubans listen to Fidel Castro on July 26, 2006
Loved and reviled, he endured the toughest, longest-lasting economic embargo ever imposed on any nation.
"He'll be remembered as maybe the most historic figure in modern Latin American history," said Brian Latell, a former CIA analyst and a leading Cuba expert. "It's going to be impossible to fill his shoes.''
Supporters say Castro has been a tireless defender of the poor who tried to create a classless society in the face of intense U.S. hostility. But critics say he drove his country into economic ruin, denied basic freedoms to 11 million Cubans at home and forced more than a million others into exile.
Castro's legacy is that of "Fidel, the great revolutionary, and Castro, the great dictator,'' said Marifeli Perez-Stable, a Florida International University scholar who writes about Cuba.
Castro's accomplishments in social justice and national sovereignty "might well play second fiddle to his inability to let go of power," Perez-Stable said. "We don't know yet what costs Cuba will have to pay for his long reign." 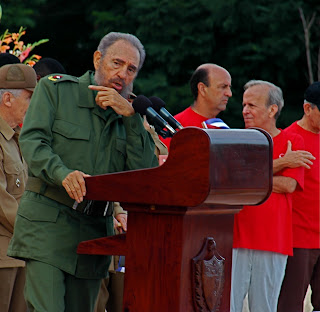 July 26, 2006
Certainly Castro's influence has reached far beyond Cuba, said Wayne Smith, the top U.S. diplomat in Havana during the Carter administration.
"His most important contribution was a society that was at least based on egalitarian ideas -- free health care, education for all and the idea that any citizen could reach the top," Smith said. "I think Castro will be remembered as one of Cuba's greatest figures. Before Castro, Cuba was something of a banana republic. He projected it onto the world stage in a role that sometimes rivaled that of great powers."
During the October Crisis of 1962, Soviet leader Nikita Khrushchev suggested stationing nuclear missiles in Cuba. Castro agreed and the two superpowers teetered on the brink of nuclear war.
John F. Kennedy and Khrushchev negotiated an end to the stand-off, thought to be the closest the two nations ever came to an all-out nuclear war.
In 1992, Castro told former U.S. Defense Secretary Robert McNamara that there were 162 nuclear missiles in Cuba at the time of the crisis.
McNamara asked the Cuban leader if had recommended the missiles be launched.
"Yes, I did," Castro told him.
"And what would have happened to Cuba?" McNamara asked.
"It would have been destroyed," Castro said. 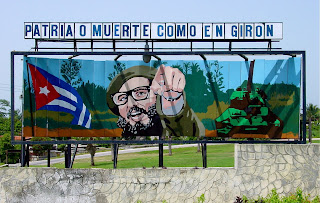 The sign says: "Homeland or death as in Girón," a reference to the Bay of Pigs invasion, when Cuban soldiers defeated U.S.-backed exiles who landed at Girón Beach.
The U.S. government spent hundreds of millions of dollars over a half century trying to kill, undermine or otherwise force Castro from power. The CIA plotted to kill him using everything from exploding seashells to lethal fungus. American officials financed dissidents and pro-democracy activists. But nothing worked during 10 successive administrations, from Dwight Eisenhower to George W. Bush.
President-elect Barack Obama, who takes office next week, will head the 11th U.S. administration and has vowed to loosen some of the economic sanctions against Cuba.
At the same time, hardliners in Miami say they won't give up until the Castro brothers are gone and Cubans have free elections and a market economy.
Supporters of the socialist government say no one should count out Fidel Castro quite yet. He has had a knack for beating impossible odds, Cuban journalist Marta Rojas said.
"One of Fidel's greatest strengths is to turn defeat into victory," she said.
- Tracey Eaton
Posted by alongthemalecon at 5:32:00 PM