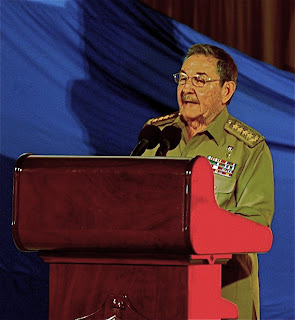 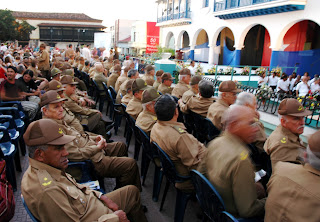 Top government officials, including Vice President Carlos Lage and others, sat in front of Raul Castro during his 50th anniversary speech in Santiago de Cuba. But there were also plenty of military uniforms in the front rows to the left of Raul Castro as he spoke. That's no surprise. Raul was chief of the Cuban armed forces for nearly five decades. He evidently looks out for his troops.
Gen. Julio Casas Regueiro is the new armed forces chief. The 31-member Council of State named him in February 2008 when Raul became president. 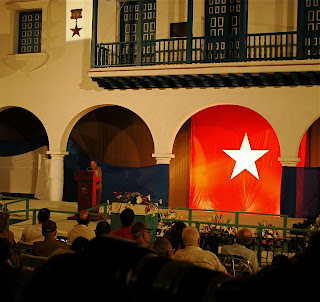 I didn't get any great images from my vantage point. But these pictures give you an idea of the scene. 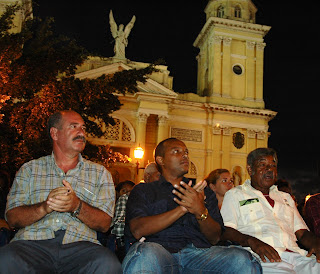 Several Cubans told me they thought the spectators were unenthusiastic. Here are a few of them, so you can decide for yourself.

"Several Cubans told me they thought the spectators were unenthusiastic."

I guess Raul has a way with the crowd... NOT.

I don't get the sense that he is much of a leader, more of the assistant manager really.

In the end it will be their undoing because without new blood being put into the leadership over the decades, when these guys are gone in the next 5 to 10 years, the much younger generation will probably not have the same motives or ideals that they have and change will be inevitable. The biological solution I guess.

HavanaJournal - this post includes a photo showing some of the early physical differences between the two brothers.
Castro loyalists say the two brothers may not look alike, but they agree on the direction of the country. I know some people who don't entirely agree with that.