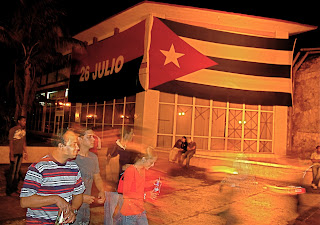 CUBAPOLIDATA, which describes itself as "a gateway to Cuba's politico-military affairs, has an interesting take on Fidel Castro's health:

Rumors swirl, yet again, Fidel Castro is gravely ill. This generation of rumors has happened in the past, however, there is certain credence to the rumor. The online cultural magazine Cuba Encuentro was told by well informed sources, who asked to remain anonymous: “Castro’s life cycle seems totally exhausted and his state is irreversibile.” These sources affirm, “It has been more than a month that he does not get up from bed,” adding “Fidel has had more than one grave encounter with his brother Raúl, even insulting him."

It is questionable whether the latter is at all true but the former might hold sway in fact. Cuba Encuentro is edited by Annabelle Rodríguez who is the daughter of the late Carlos Rafael Rodríguez, a Cuban Communist intellectual. Ms. Rodríguez’ sister, Dania Rodríguez García-Buchaca, is married to none other than Raul Castro’s #2 man, Army Corps General Julio Casas Regueiro, which is not widely known. The familial ties linked directly to Raul’s top general leads to a certain relevant truth or is it part of the regime’s disinformation?

Interesting post. The point about family ties is intriguing.
Posted by alongthemalecon at 1:02:00 AM

Interesting what is happening right now. Great read on the family ties. Makes my head spin.

Too bad Cuba can't just report the news without being paranoid that the US will attack.

The whole "evil empire" moniker will look even more stupid once Obama is in office.