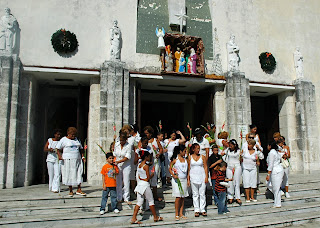 Members of the Damas de Blanco gather after Sunday mass in Havana.

President George Bush on Tuesday called the Castro government one of the "cruelest dictatorships this hemisphere has witnessed."
In a parting message, Bush said the Cuban people will someday enjoy the "blessing" of liberty. And he said his "message of hope" was aimed at jailed Cuban dissidents and their families.

The American people admire the courage of these families and the emerging civil society movement, reflected in the existence of groups like the Damas de Blanco, who stand up for the fundamental human rights bestowed by our Creator, Bush said.

It's interesting to see how Bush injects religion into his messages. I wonder whether it's universally accepted that God is the one who gives us our human rights? Does anyone believe that our mere existence on Earth makes us worthy of fundamental human rights? Does Bush believe that "our Creator" also bestows human rights on more than 1.25 billion Chinese? Or is that task somehow delegated to Buddha? Then there are those billion-plus people who believe in Islam... Bush didn't mention them.
Posted by alongthemalecon at 6:04:00 PM

Bush SHALL BE HELD ACCOUNTABLE FOR ALL HIS CRIMES COMMITTED DURING HIS ADMINISTRATION.
ONCE CONVICTED SHALL BE LOCKED UP IN GUANTANAMO AND THE KEY TURNED OVER TO CASTRO OR CHAVEZ.
MAY GOD BLESS HAMAS NOW AND PER OMNIA SAECULA SAEWCULORUN, AMEN,AMEN,AMEN. ALELLUIA!

Seeing as his last remark was an allusion to the Declaration of Independence ("all men are...endowed by their Creator with certain unalienable Rights"), I think it's a little uncharitable to suggest Bush is excluding non-Christians. I'm guessing that in Bush's mind, the Creator as he envisions him created and gave fundamental rights to Muslims, Buddhists, and everyone else, regardless of their beliefs.

P.S. You're blog's fantastic. Keep it up.

Esteban,
Thanks for your comment. Good point about what Bush might have had in mind. That makes sense. I know my comment was a little flip - maybe some Bush fatigue is setting in. Tracey