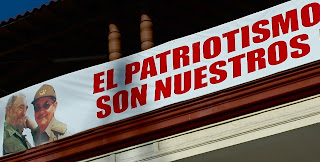 Raul Castro's larger-than-life brother overshadowed him for decades and he seemed to prefer the supporting role, some analysts say. But Fidel Castro fell ill in 2006, forcing Raul to center stage.
As president, Raul Castro addressed the nation in Santiago de Cuba on the 50th anniversary of the Cuban revolution. He drew the strongest applause when he mentioned his brother, Fidel.
“We know that a man alone doesn’t make history, but some men are indispensable as they can have a decisive influence in the course of events,” Raul said. “Fidel is one of them; nobody doubts it, not even his most bitter enemies.”
Raul Castro Ruz was born on June 3, 1931, on his father’s hacienda near the eastern town of Biran.
He fought alongside his older brother during the Cuban revolution, which began with the failed attack on a military barracks in July 1953.
By 1958, he was heading a rebel division, but the U.S.-supported Cuban air force was pounding his soldiers. Desperate for a way out, Castro led the kidnapping of 49 American citizens in eastern Cuba. And he did it without consulting his brother, showing an early ability to act on his own.
But Fidel Castro’s own forces advanced, distracting the air force from his brother’s fighters, and the insurgents declared victory on Jan. 1, 1959.
Through it all, Raul Castro was fiercely loyal to Fidel and eventually assumed the No. 2 spots in the military, the central government and the Communist Party.
After Cuba aligned with the former Soviet Union, relations with the U.S. deteriorated and the Americans – along with anti-Castro exiles – launched dozens of plots to try to kill Fidel Castro.
The Castro brothers quickly decided that they would only rarely appear in public together to ensure continuity if one were assassinated, analysts say. 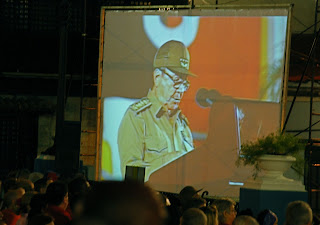 As the second power in Cuba, Raul Castro showed he could be both compassionate and tough.
To Fidel Castro’s estranged daughter, Alina Fernandez, he’s a kind family man, someone who cares more about his children and grandchildren than the day-to-day chores of running a bureaucracy. And unlike his older brother, some say, he is easy-going and enjoys cracking off-color jokes.
Others describe him as a difficult boss, a task master who is sometimes ruthless toward perceived enemies.
He can also be blunt, speaking in decidedly undiplomatic terms; he once called foreign journalists “sons of bitches” while a TV camera was broadcasting live.
In an interview with Cuban journalist Luis Baez, Raul Castro said he was his own toughest critic.
“Every day, I analyze what I did during the day…My head is a volcano overflowing with ideas. Coffee doesn’t keep me awake. Problems keep me awake.”
And he had plenty of problems in 1989 when four top officials – including a popular general named Arnaldo Ochoa – were convicted of corruption and drug trafficking and executed by firing squad.
During the trial, Raul Castro said he sometimes looked in the bathroom mirror and saw tears streaming down his face over Ochoa’s fate.
In Miami, meanwhile, some critics said Ochoa had become a political threat to the Castro brothers, leading to his execution.
After the scandal, the Interior Minister was reorganized and many of Raul Castro’s trusted friends were given top positions.
In the years that followed, the defense minister worked to turn the armed services into a money-maker. And soon the military was heading such state-run companies as Gaviota, which owns hotels, discos, restaurants, shops and charter services.
Raul Castro “created a new class of military entrepreneurs with a stake in the enterprises that provide them with managerial opportunities, employment and better living standards than that of the general population,” Stratfor reported.
By controlling a large segment of the economy – at least 20 percent by some estimates, military leaders are in a position to hand out plum jobs to loyal supporters. That, analysts say, can only help Raul Castro consolidate power.
But some people wonder how long it will last, saying that Castro doesn’t have his brother’s charisma or political skills. 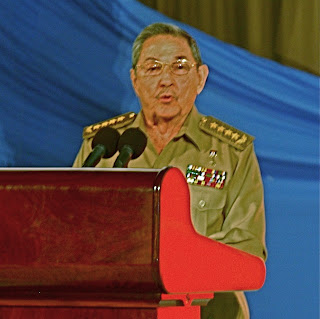 For many Cubans, Fidel Castro remains the icon of the revolution, a grandfatherly figure who – despite his faults – never stopped fighting for his people.
But Raul Castro has not earned the same reverence, some analysts say. And because of that, some say, the Cuban people may step up the pressure on his government to improve their dire economic straits.
“I see a great potential for civil unrest,” said Silvia Wilhelm, a Cuban-American leader in South Florida. “Cuba has not made the necessary economic and political changes to meet the day’s realities.”
Jose Basulto, head of an anti-Castro group called Brothers to the Rescue, said only a magician would be able predict how things will shake out in post-Fidel Cuba.
“Take cover, because only God knows what will happen. The ingredients are many…factor in hatred, despair, envy, ambition, revenge and other basic survival instincts. I suggest also that you look forward to chaos as a substitute for Fidel Castro.”
Exiles, dissidents and U.S. officials will be scrambling to try to force some sort of political transition, most agree. And eventually, Cuba may reach out to its powerful northern neighbor to try to cut a deal, some say. Under such a scenario, the island just might offer to maintain stability and prevent a mass exodus of rafters in exchange for a U.S. promise to support the new government and allow it to move ahead under its own terms.
But not everyone expects such turmoil and Cuban officials say a 2002 amendment makes socialism an “inalterable” part of the nation’s constitution.
Raul Castro has said the 1959 revolution still has mass appeal.
“Anyone can control the situation,” he said told foreign reporters in 2001.
Fidel Castro, after a June 2001 fainting spell, also expressed confidence that the revolution will endure unscathed after his death.
“I didn’t inherit any position and I’m not a king, so I don’t need to prepare a successor,” he said.
“There won’t be any trauma and no transition is necessary.”
- Tracey Eaton
Posted by alongthemalecon at 12:27:00 PM