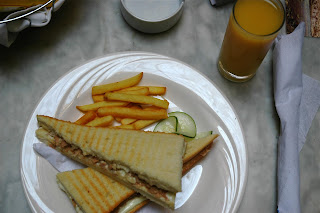 Mini-serving of fries
I paid around 7 CUC for this tuna fish sandwich in the courtyard restaurant of a top-notch Havana hotel. The tiny serving of french fries got my attention. This wasn't like an American restaurant that gives you more fries than you can eat. Here you're left wanting at least a few more. What gave me some comfort was the thought that I was probably helping one of the restaurant employees. And that's because my 7 CUCs likely paid for both my fries and those that someone took home.
When I was in Havana recently, many Cubans complained about the cost of living. Certainly, the country seems expensive.
Ordinary Cubans are ones who suffer the most, of course. But the exchange rate is also hard on any travelers with U.S. dollars. That's because the socialist government tacks on a surcharge of 10 percent for every dollar exchanged.

Exchange $100 U.S. and you wind up with only about 80 Cuban convertible pesos, also known as CUCs or chavitos.
There's also another official currency, the lowly Cuban peso. Most Cubans are paid in these Cuban pesos, which traded for about 24 pesos per CUC the last time I checked.

A monthly paycheck of 480 pesos equals about 20 CUCs. A lot of salaries are in that range or a little lower.

Castro government supporters say the salary appears lower than it seems because it doesn't include all the services that the government provides. But most Cubans complain that it's difficult to live on 20 CUCs a month.

Many Cubans also say that their while salaries are in regular Cuban pesos, many necessities - shoes, shirts, shampoo - are sold only in CUCs. That means it might take them three or four days to earn enough money to buy a tube of 3-CUC toothpaste. And shoes could cost two months' salary.

Below is a random and admittedly incomplete list of prices that gives you a glimpse of what some things cost in Cuba.

The prices immediately below are in CUCs. One CUC equals roughly $1.25 U.S. So the first item - a can of Red Bull - would cost $2.50 U.S. for anyone using American dollars. 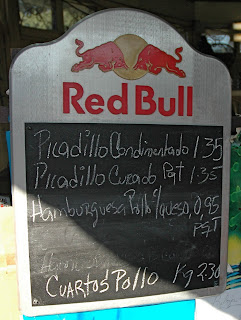 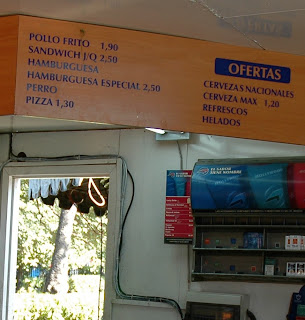 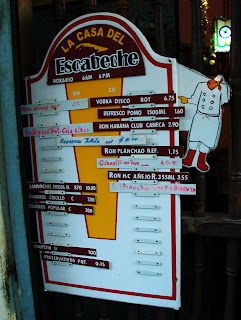 These prices are in regular Cuban pesos: 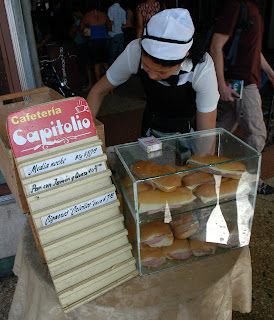 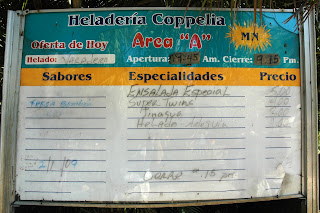 Coppelia
Posted by alongthemalecon at 5:09:00 PM

Where's your favorite restaurant here? The food is almost universally terrible, we've found. Aside from El Aljibe and El Portico lobby bar at the Parque Central, it's all pretty lousy so we cook our own. We're always looking for good recommendations though (at least some place that won't give us food poisoning).

El Aljibe is hard to beat. It's good, fast, predictable. I like some of the home restaurants in Miramar and there used to be a good one in Casablanca, but it's sometimes hard to find restaurants that are fast. You usually have to settle in for a while. I used to go to a place in Guanabo that served oven-baked pizza. It was always great. One time my girlfriend and I had an entire meal, then discovered I didn't have any money. Some enterprising thief had snatched a bag of stuff from my Jeep earlier in the day and I didn't realize it. The restaurant folks just said, no problem, pay us whenever.

A few guys used to go door-to-door in Tarara selling live lobsters. It was $1 or $2 per lobster at first, then the price went to $3, not including a tip for the security guards.

La Cocina de Liliam along Calle 48 between 13th and 15th in Miramar used to be great. I haven't been there in a while.

Picolos is the name of the beach pizza restaurant.

Went to the Melia Cohiba for the first time today and it looked like they have a nice pizzaria as well up near their pool. We'll have to try it some time.

When I was in Havana I found two places with really good food. They're not restaurants, but paladares. One of them is called Gringo Viejo, and it's close to Melia Cohiba, you can get there in a 10 minutes walk. The other one is El Hurón Azul. Very nice food too. I cannot remember the adresses exactly, but I'm pretty sure someone will be able to tell you there.

Thiago,
Great suggestions. I like both of the places you mention. I used to go to Huron Azul a lot. It's a few blocks from the International Press Center on La Rampa in Vedado. It doesn't look great at all from the outside, but once you get inside it's nice. I haven't been there in a while. Gringo Viejo had good food, too, but I only went a few times.