U.S.-Cuba relations: In the deep freeze for more than a century

The United States and Cuba have been locked in a Cold War grudge match for more than 50 years.
The United States recognized the new Cuban government after Fidel Castro’s victory in 1959, but relations between the two countries quickly soured after Cuba began expropriating American-owned businesses and reached out to the Soviet Union.
On April 17, 1961, a force of some 1,300 CIA-led Cuban exiles invaded the island’s southern coast. The Bay of Pigs operation was a colossal failure.
In October 1962, the U.S. government discovered that the Soviets were placing long-range ballistic missiles in Cuba. The threat of nuclear war loomed during the 13-day standoff. Soviet leader Nikita Khrushchev finally removed the missiles after the U.S. promised not to invade Cuba.
U.S. government hostility toward Castro remained. Fabian Escalante, a Cuban security official, estimated that the CIA tried to kill Castro 638 times. Weapons included an exploding cigar and a fungus-laced diving suit.
But nothing worked. 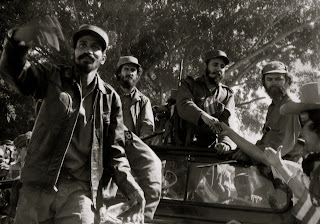 Fidel Castro shakes hands with a supporter. Juan Almeida, one of the original commanders of the Cuban revolution, is at left.
Castro deepened his ties to the Soviet Union, which kept the Cuban economy afloat with billions of dollars in aid per year.
The Soviet Union's demise hit Cuba hard.
By 1990, Fidel Castro said Cuba had entered a profound economic crisis. He called it el período especial or ``special period'' during peacetime.
Blackouts darkened the capital and the cost of living soared. Disenchanted youth roamed the streets.
By August 1994, Havana reached the breaking point, erupting in riots on a hot summer day. Castro himself confronted a crowd of rock-throwing teen-agers and convinced them to return to their homes.
But economic conditions remained grim and the government had to do something -- or face collapse.
Cuban officials decided to open the island to international tourism. That brought in hard currency, but also new social inequalities, crime and other ills the socialist regime had wiped out in the early 1960s. 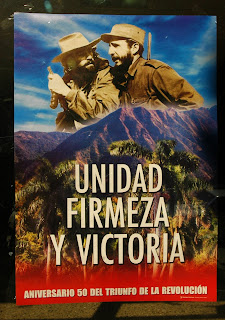 By 1997, hoards of prostitutes roamed the Malecón, Havana's famed seaside highway. The black market flourished. The sellers of contraband cigars flooded Old Havana and illegal home restaurants served lobster to tourists.
Mindful of his legacy, Castro hosted Pope John Paul II in January 1998. Before the pontiff arrived, Cuban authorities cleaned up Havana and clamped down on prostitution and other crimes that had tarnished Cuba's revolutionary image.
In 1999, something else drew the world's attention to Cuba: A high-spirited boat-wreck survivor named Elián Gonzalez.
The Cuban boy was rescued off Florida's coast that year in a failed journey to the United States. His mother and 10 others perished at sea.
Castro waged a nationwide campaign to have the child returned to his father in Cuba. Literally millions of Cubans took part in rallies held practically every week.
The boy's Florida relatives fought to keep the boy, but they lost their bid. U.S. agents snatched Elian in an April 2000 raid and he was flown back to Cuba.
Analysts say Castro used the battle over Elian to rally support, especially among youth. And in the years that followed, the Cuban government pushed hard to bring young people into the revolutionary fold even as signs of Castro's mortality became more evident.
Defiant to the end, Castro stuck with his own brand of socialism aimed at protecting the poor and vulnerable and preventing the U.S. government -- or the Miami mafia, as he called Cuban exiles -- from gaining control.
Appearing before tens of thousands of followers in Granma province in eastern Cuba on July 26, 2006, Castro said, ``Little Bush,'' as he called President George W. Bush, didn't need to spend millions of dollars planning the island's transition to democracy.
``Granma doesn't need any Yankee transition to vaccinate children and teach our people to read and write,'' Castro said just days before undergoing surgery. ``They should come to Granma if they want to see what a health program is.''
Castro also vowed that Cubans would ``fight to the last drop of blood'' to defend the Cuban revolution.
``Imperialism will never be able to crush Cuba,'' he said. ``Long live the revolution!''
- Tracey Eaton
Posted by alongthemalecon at 7:23:00 PM