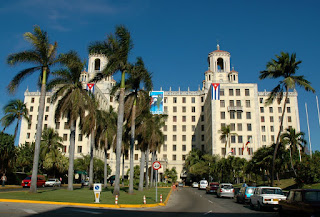 The Hotel Nacional is a few blocks from the Capri. It has been a favorite hotel for American tourists visiting the island illegally. If Barack Obama lifts travel restrictions, I'm sure the place would be flooded with Americans.

We're always hearing that U.S. trade sanctions against Cuba cost the Caribbean nation billions of dollars every year. Well, writer Margot Pepper says they hurt the United States, too. She projects that the sanctions will cost the U.S. $3.6 billion in lost sales in 2009, according to this article.
I don't know about all that, but I know jobs are scarce where I live in north Florida and unemployment is around 10 percent. So we could use the jobs. And God knows Cuba needs a boost. Its claimed unemployment rate was 1.9 percent in 2007, according to Cuban government figures. I don't know how they come up with that number. It looks like pure fantasy to me. But what's certain is that ordinary Cubans are having a tough time. 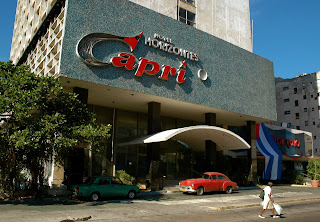 Hotel Capri, linked to the American mafia in the 1950s, has been closed since around 2004 and has been undergoing a $15 million renovation. Actor George Raft ran the hotel for the mob until Fidel Castro took power.

Well, I guess you don't have to know Cuba that well to know that a 1.9% unemployment rate is simply not true. Just walk trough the streets of Havana on a tuesday afternoon and see how many people you see hanging around instead of working. Of course, because of the socialist system, it is probably not worth to get a job, you won't get paid a lot much than someone who doesn't work. Anyway, I hope Obama and his team change things and stop the bloqueo. Like you said, it would be good for both countries.

yeah, and many people who do work look for jobs that have some side benefit. spots at food warehouses, for instance, are coveted because of all the frozen chickens and other stuff that can find their way to your home.