Whatever happened to the lost city off the coast of Cuba? 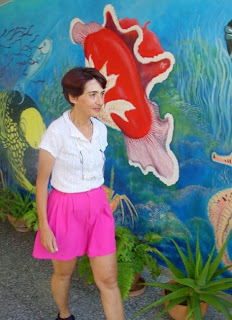 Paulina Zelitsky
Something is down there. Paulina Zelitsky was sure of it. The Soviet-trained engineer was convinced there was a lost city in the waters between Cuba and Mexico. As her theory went, a series of islands linked Cuba and the Yucatan Peninsula thousands of years ago.
Something - perhaps a giant earthquake - brought at least one island down to the ocean floor. Remote deep-water cameras have shown structures rising from the sunken island.
Polished granite was recovered from the site and doesn't appear to be from Cuba, Zelitsky told Linda Moulton Howe in 2002.
Granite "is totally foreign to Cuba," Zelitsky said. "But it's also not known in Yucatan because Yucatan is also limestone, not granite. Granite is found only in the center of Mexico."
Zelitsky said the purported lost city "covers approximately 20 square kilometers... It's flat, completely flat."
Megalithic structures - big stones 10 to 15 feet high - rise from a flat field of white silicone, she said.
The prospect of a lost city is fascinating, but I haven't seen much about it lately. I wonder if the project is still active. Perhaps there's no money for further exploration.
I interviewed Zelitsky and her husband Paul Weinzweig in 2002. They had an office in Tarara, the seaside community where I lived, and operated a Canadian company called Advanced Digital Communications.
More information and photos are here, in Spanish. An interview with Paul Weinzweig is here. and a 2002 Washington Post story on the discovery is here.
Posted by alongthemalecon at 6:03:00 PM

well there is this http://www.thestar.com/news/gta/2009/12/03/caledon_womans_mexican_arrest_crazy_lawyer_says.html


"Paulina Zelitsky, 64, of Caledon was detained Monday without a warrant in Mexico City, moments after stepping off an airplane, said her Mexican lawyer, Roberto Garcia...
Zelitsky wound up leaving Mexico in 2008 soon after an attempt was made on her life. According to Mexican news reports, Zelitsky was the victim of a failed kidnapping attempt in the municipality of Cunduacán, after an "armed commando" fired three shots at her chauffeured vehicle.
Her family said the incident left her shaken and she only decided to fly back this Monday because she felt enough time had passed.
Garcia explained that the Martinez brothers had actually filed a criminal complaint against Zelitsky in August, which was used to secure her arrest. They purport that Zelitsky evaded arrest by leaving Mexico in November 2008, an argument that holds no water considering she wasn't charged until 10 months later, Garcia said.
Zelitsky's family believes officials have been bribed to secure her arrest. The Martinez brothers come from a politically connected and wealthy family.
Tapanes, who was able to reach his mother on Tuesday, said the Martinez brothers approached Zelitsky after her arrest and said they could arrange for her immediate release if she paid them a sum of money.
He said his mother is feeling "overwhelmed" but is a "very strong lady."

what do you think?

wow, what a mess! it sounds like a complicated story.