Time/CNN goof: They describe Cuba's most famous blogger as "he" 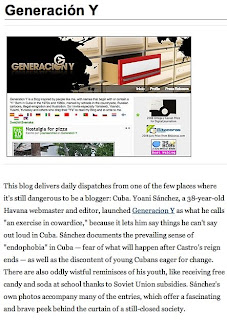 You can see the "he" error in this screenshot, above.
Generación Y is one of the 25 Best Blogs of 2009, according to a list by Time and CNN.
Of the 25 bloggers, Yoani Sanchez of Generación Y says she most certainly has the least access to the Internet. And she says she can't see the very blog she writes because Cuban censors block it.
Generación Y is 12th on the list. The top three are:
Talking Points
Huffington Post
Lifehacker
The Time/CNN list calls Cuba "one of the few places where it's still dangerous to be a blogger." It also describes Yoani as "he," not "she."

I've met Yoani and can confirm that she is not a "he."

Seeing dumb mistakes like that makes me wonder about the entire list.
In any case, Time and CNN applaud Yoani for documenting "the prevailing sense of 'endophobia' in Cuba — fear of what will happen after Castro's reign ends." The list says:

There are also oddly wistful reminisces of his youth, like receiving free candy and soda at school thanks to Soviet Union subsidies. Sánchez's own photos accompany many of the entries, which offer a fascinating and brave peek behind the curtain of a still-closed society.