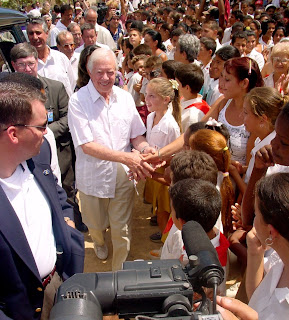 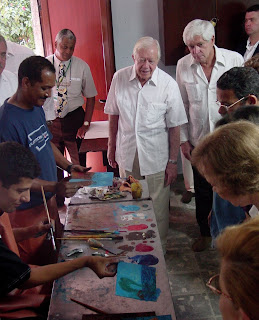 Time sure flies. It's been more than six years since Jimmy Carter traveled to Cuba.
Carter was the first sitting or former American president to visit the island since 1928. He urged Fidel Castro to hold free elections and improve human rights. He called on the United States to take the first step toward ending the bitter relations between the two nations. And he made an unprecedented live television broadcast to the Cuban people. 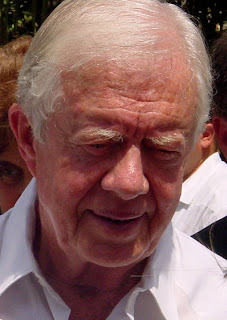 Jimmy Carter during the May 2002 visit 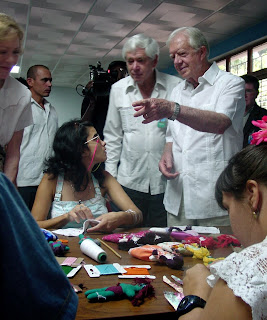 The day after his historic speech, Carter said:

...we could not find anyone on the streets or in the markets who had not heard it. All analysts said it was the first time in 43 years that citizens had heard any public criticism of the Cuban government, much less direct condemnation of human rights violations....
I anticipated President Castro would be upset, but he greeted me after the session, and we attended the Cuban All-Star baseball game, where I threw out the first pitch. 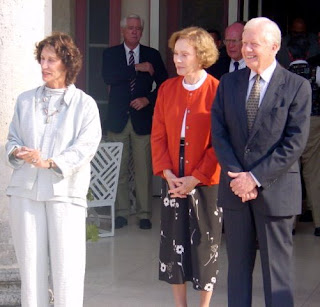 Jimmy Carter and the former First Lady with Vicki Huddleston, then-chief of the U.S. Interests Section in Havana. They are at a reception at the ambassador's residence. 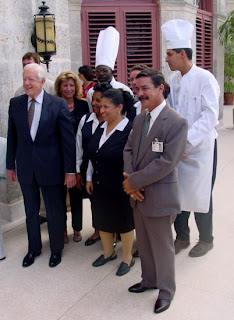 Carter, above, poses with Cubans who work for U.S. officials in Havana. In the photo below, Vicki Huddleston, left, joins the group. Who's that in the back? James "Chip" Carter? I don't recognize him. 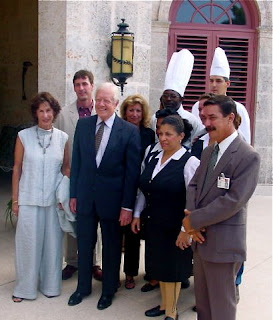 I pressed him unsuccessfully on some suggestions for opening up his closed political and economic system. We assessed his motivations to be a genuine belief in maintaining equity of treatment and an absence of class distinctions for Cubans and determination to retain the tightest possible control over all aspects of life in the nation. Also, he fears that any conciliatory action would be seen as a sign of weakness against a country "that is still attacking us." 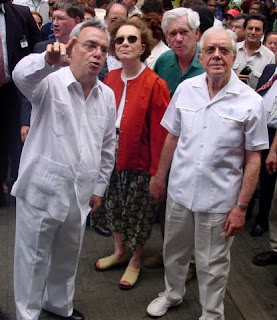 Havana City Historian Eusebio Leal Spengler showed Jimmy Carter the sights in Old Havana.
More than six years after Carter's visit, some things have changed in Cuba and much remains the same. Cuban officials maintain control over many aspects of life in Cuba. Many U.S. officials insist that Cuba change its form of government. And U.S.-Cuba relations remain poor, although some people expect some improvement under Barack Obama. 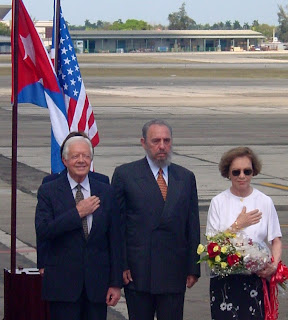 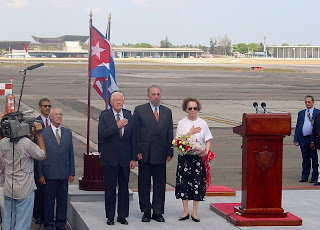 At the Jose Marti International Airport in Havana as the Star-Spangled Banner played.
Posted by alongthemalecon at 7:37:00 PM