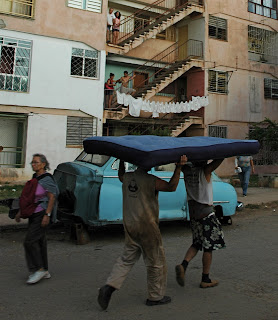 There's nothing like a good mattress, but in Cuba such luxuries are not always easy to find. Some Cubans tell me they have slept in the same bed - on the same mattress - since childhood. Having a mattress for 20 or 30 years isn't rare at all. But most mattresses don't hold up that well for so long. They flatten in the middle. They rip, they tear, they crumble. But Cubans patch them up. They re-stuff them with a variety of materials, including banana leaves and hay. They find ways to make them last. 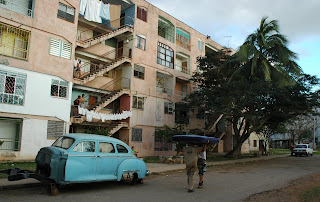 New mattresses cost about 200 convertible pesos or more - some $250 U.S., which is out of reach for many Cubans. Even a re-stuffed mattress costs 40 to 50 convertible pesos - equal to two or three month's salary. So mattresses are coveted. They're not tossed aside or thrown away. No one leaves them at the curb for someone to pick up. Instead, they pass them from father to son, brother to sister, cousin to cousin.
Cubans also trade and sell them. Enterprising mattress makers walk the streets of Alamar, east of Havana, yelling, "Mattresses! Mattresses!"
When I lived in Cuba, I slept on a king-sized mattress that I brought to Cuba from Mexico City. Cubans marveled at that because you rarely see king-sized mattresses on the island. I don't think I've even seen one in a hotel. Queen-sized mattresses, introduced to the world in 1958, a year before the Cuban revolution, are a bit more common. But I'd venture to say that most of the mattresses in Cuba are singles and doubles.
A big jump in American tourism could begin to change all that.
Posted by alongthemalecon at 5:58:00 AM

I don't know what to say T. That post is fascinating, and sad at the same time. Wish I was there already (without suffering too much tourist guilt.)

Thanks for the comment, Evan. Cuba is a fascinating place. I encourage people to go there because it's a country that makes you think. You become more thankful for what you have. You see the grace and dignity of Cubans and realize that material possessions aren't everything. At the same time, mattresses are other basics sure are important.