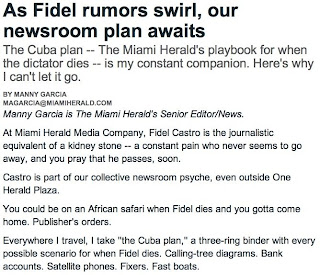 Manny Garcia, a senior editor at the Miami Herald, wrote a clever and insightful column Sunday on what it's like to wait and plan for Fidel Castro's demise.
Editor & Publisher and Romenesko picked up the story today. It's a great read. Garcia said he's the official keeper of the Herald's here's-what-we-do-when-Castro-dies plan.
The plan is in a three-ring binder that Garcia takes with him even when going on vacation. He writes:

You could be on an African safari when Fidel dies and you gotta come home. Publisher's orders.

It makes sense. Fidel Castro's death will be the story of the century for Miami. And my guess is that the Herald will provide top-notch coverage. The Herald's executive editor, Anders Gyllenhaal, is sharp and aggressive. He was my last boss at the Herald when I worked there in the 1980s. We were in a quiet little suburban bureau, not exactly a great launch pad for young, ambitious journalists. But Anders thought big. He didn't see it as a dinky bureau. He saw it as a gateway to the Everglades and other areas. And he encouraged reporters to get out of the office and carve out new territories. "Manifest Destiny," he called it. Or something like that.
My guess is that when Fidel Castro dies, the Herald's coverage will be just like Anders - aggressive, hard-hitting and imaginative. 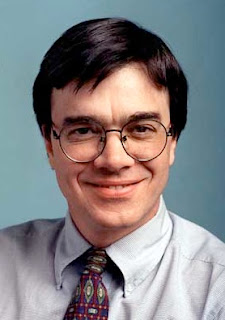 Anders Gyllenhaal
The pressure will be on and the Herald won't be able to say it wasn't ready. This isn't a natural disaster that gives a newspaper no time to prepare. People have been predicting Castro's death for years. The rumor mill has killed him off countless times. So it's not as if the Herald hasn't prepared.
The Herald has been getting ready for Castro's death since the 1990s. And journalists will be watching to see how the Herald performs.
Emotions are going to be running high on both sides of the Florida Straits. It's impossible to know what's going to happen and how people and governments will react to Castro's death. Much depends on the social, political and economic conditions in Cuba at the time. The state of U.S.-Cuba relations will also be a factor.
When I was Cuba bureau chief for the Dallas Morning News from 2000 to early 2005, I had a key role in planning the paper's coverage in the event of Castro's demise. I didn't have a three-ring binder - the Holy Sh-t Plan, as Garcia calls it - but there were plenty of memos, coverage plans, advance stories, phone contact lists and more.
I felt a constant pressure to make sure I could be reached by my editors in Dallas just in case something happened.
The paper sent me to Afghanistan to cover the fighting after the Sept. 11 attacks and even then as I followed the Northern Alliance troops who pursued the Taliban I couldn't help thinking about Cuba.
I was in Cuba when Fidel fainted in June 2001. It happened over the weekend. I had taken a drive to Matanzas or Jibacoa or some town east of my home in Tarara. I was heading home and stopped at a cafeteria. That's when I heard over a radio that Fidel had fainted, and so I hustled back home and wrote a story.
A reporter later asked me some questions about what it was like to work in Cuba and not long after that her story appeared in the Columbia Journalism Review, saying that American correspondents were in Havana waiting for Castro to die.
In 2005, the Morning News closed its Cuba bureau. I left the paper later that year and joined the Houston Chronicle. That paper also wanted to have a plan for Fidel and I helped with that.
It's only natural that journalists prepare for big stories. Readers expect and demand it.
As for how to cover the big event, I like Vanessa Bauza's plan. She used to be the South Florida Sun-Sentinel's correspondent in Havana and told the Colombia Journalism Review that her plan is simple:

I pick up the phone and say, 'Send help.'

Update: More staff cuts were just announced at the Herald. More on that is here.

No doubt, resources, staffing and money could have an impact on the Herald's Holy Sh-t coverage plan.