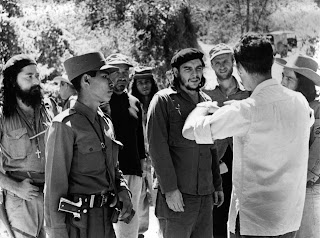 A Cuban friend identified an old black-and-white photo that I posted last month. The man in the white shirt talking to Che is Tomás Gutiérrez Alea, a Cuban filmmaker also known as Titón. The photo was taken in 1959 during the making of Historias de la Revolución. Che isn't in the 81-minute film, but visited the set and likely advised Gutiérrez.

* The clandestine battle in Havana
* The fight in the Sierra Maestra
* The taking of Santa Clara, led by Che

Gutiérrez, who died in 1996 at the age of 68, directed more than 20 features, documentaries and short films, Wikipedia says.
He was "known for his sharp insight into post-Revolutionary Cuba, and a delicate balance between dedication to the revolution and criticism of the social, economic, and political conditions of the country."
His work was part of the New Latin American Cinema movement, also known as “Imperfect Cinema,” was explored "problems of neocolonialism and cultural identity," Wikipedia says. His work became increasingly critical of the revolution and of government bureaucracy as he grew older, according to this biography of Gutiérrez.
He co-directed Strawberry and Chocolate, a critically acclaimed Cuban movie about a flamboyantly gay artist and his combative relationship with a Marxist student. Strawberry and Chocolate was the first Cuban movie to be nominated for the Academy Award for Best Foreign Film.
Posted by alongthemalecon at 4:20:00 AM