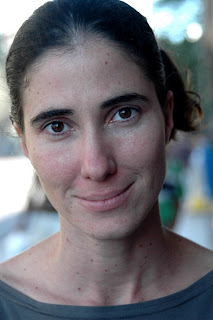 There are no bearded ones, no rifles, much less a leader shouting from the stage. It is slow, and still focused, but it will reach nearly all Cubans. Its commanders carry strange names like Gmail, Wordpress, Skype and Facebook: they do not create divisions but rather unite people.

The spread of the Internet, Sanchez says, can't be stopped. And she's right.
If you need any convincing on that point, read Technorati's 2008 State of the Blogosphere. Blogging is a global phenomenon and blogs are here to stay, the report says.
Technorati last year was tracking blogs in 81 languages in 66 countries across six continents.

Bloggers have been at it an average of three years and are collectively creating close to one million posts every day. Blogs have become integral to the media ecosystem.

But in Cuba, bloggers face an uphill fight. Sanchez, whose award-winning blog is called Generacion Y, writes that officials wouldn't let her attend a conference on information and technology in Havana. Only Cubans and foreigners with credentials were allowed in.
Internet access remains a privilege given to those who "behave," she complains.
She cites a recent interview that Cuba's vice minister of New Technologies of Information and Communication gave to state-run newspaper Juventud Rebelde.
In the interview, Boris Moreno Cordovés said Cuban authorities will continue to block pornography and content related to terrorism and xenophobia. Naturally, he said, officials will also block "counterrevolutionary content" and material that might incite "subversion of the established order."
Sanchez, whose blog is translated into English here, said she found it "alarming" that political dissent seems to be lumped into the same category as terrorism and other "monstrosities." But she said the "technological revolution" will endure.

A true revolution.com takes place parallel and contrary to the rationing they want to impose on the virtual world...to prevent it or impede it there is little the ministers, or the electronic filters...can do.

P.S. I had an interesting conversation with Yoani during my last trip to Cuba and am writing a story about her and other Cuban bloggers. If you have any thoughts or insights into blogging in Cuba, I'd love to hear from you. Thanks!
Posted by Unknown at 10:24:00 AM

I appreciate Yoani and am happy for the recognition that she has achieved as a thinker and blogger; however, I wonder why the US and foreign press have picked up on Yoani to the exclusion of other bloggers. She's certainly not the only blogger in Cuba, but the US press, in particular, tends to treat her as such. I'd really like to see exposure of other Cuban bloggers expanded.

Tracey, good on you for writing a story about the other bloggers. There quite a few blogs out there that originate from Cuba and people should hear about them.

@Julie
I think the press picked up on Yoani because she was one of the first to blog. Other bloggers are now writing from Cuba because of what she was able to start, the media will eventually pick up on the others, it'll just take a little time. I'll keep my fingers crossed that they do...

I agree with Muchacho Enfermo that some journalists picked up on Yoani because she was one of the first to blog. Then she began winning international awards and the Cuban government wouldn't let her leave the country to accept them. Her profile grew and that drew more coverage.
Many journalists see her as a symbol, a lone figure challenging a sprawling government machine. That makes for an interesting story.
And of course, it's faster and easier to talk to Yoani than going out and finding all those undiscovered Yoanis quietly blogging away.
It helps that Yoani's posts are original, creative and witty. She is talented and gracious. She sticks to her guns. And she has courage.
I wonder what would happen if the Cuban government allowed Yoani to blog freely and unblocked Generacion Y so that anyone could see it in Cuba. Perhaps much of the story would go away. Who knows?
For now, Cuban officials are evidently unwilling to subject the socialist government to the free flow of information. And they are suspicious of Yoani's sudden rise to fame.
Some Cuban officials say privately that they suspect that foreign interests opposed to the socialist government are behind Yoani and have propelled her into the spotlight.
Yoani denies such accusations.
P.S. Julie - If you know of any Cuban bloggers who might be willing to correspond with me for this story, please send them my way. Thanks.