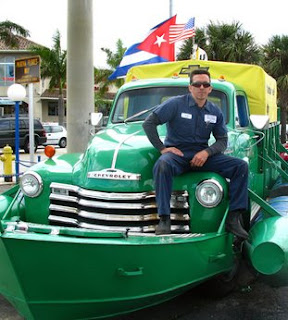 Photo credit: El Nuevo Herald
Luis Grass, the intrepid auto mechanic who turned an antique 1951 Chevy truck into a boat to try to flee Cuba, has been in South Florida for four years now and has built a replica of his original two-ton craft.
I saw the story in Sunday's Miami Herald.
''My dream was to build a replica of the truck that was used in the first attempt, to keep it as a museum piece. And here it is, six years after the voyage, it's incredible,'' Grass told the Herald.
The replica cost more than $100,000, said Grass, now working in Miami as an auto mechanic - and I'll bet he's one of the best.
In 2004, I interviewed members of the Grass family along with another Cuban "truck-o-naut" for an article I wrote for the Dallas Morning News. They are an amazing bunch of characters.
Links: 2006 Car & Driver feature on Luis Grass and his green Chevrolet truck.
Posted by alongthemalecon at 7:03:00 AM