CIA stumbles upon Along the Malecon 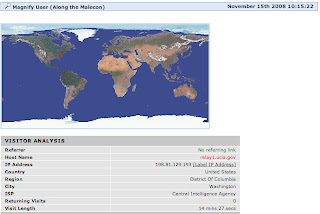 I sometimes wonder how much interest U.S. government agencies have in blogs. Over the past six months, this blog has gotten visits from universities, corporations, libraries, nonprofit organizations, city and state agencies, and even fire stations.
The Central Intelligence Agency has also stopped by Along the Malecon, lingering one day for 14 minutes and 27 seconds. Some bored employee, I imagine. Most people surf the Internet while at work, which is why Internet use drops on weekends, according to Nielsen Media Research surveys.
The CIA IP address was 198.81.129.193, which is associated with the CIA and ANS Communications, Inc.
The Agency for International Development, the State Department and other agencies have also visited this blog. State's IP address was 169.252.4.21, which comes back to clayton.state.gov. I Googled that and found I'm not the only one who gets visits from clayon.state.gov. I can't imagine there's a single employee named Clayton who is looking at all these blogs. There must be some kind of robot that roams the blogosphere looking for interesting information. Anyone know how that works? 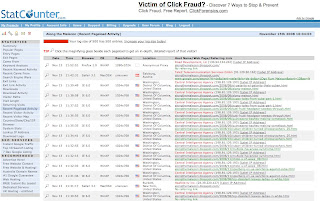 I share your concern. At one time, the United States Navy was visiting my blog very often.

By the way, I think that you have a very good blog.

I like your blog, too.
It is weird, seeing some of the government agencies that visit. And some folks we can't see. It's easy to hide behind an anonymous proxy.
Internet surfing habits are pretty strange. The Nielsen report I was referring to said that employees at IBM, AT&T and Apple Computer visited the Penthouse magazine Web site 13,000 times during a single month. Maybe those government employees are checking out the Photo (s) of the Week. :)