Fidel Castro was down, but not out 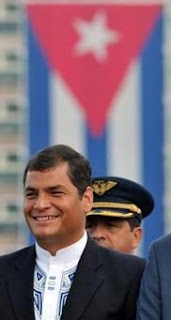 Rafael Correa. Photo credit: EFE
Health trouble evidently forced Fidel Castro to drop even further from sight around the time of the 50th anniversary of the revolution, reports Cuban Colada, the Miami Herald's daily journal about Cuba.
Castro "was in very delicate health," Ecuadorean President Rafael Correa told EFE, the Spanish news agency. He "had had a relapse..."
And that, Correa said, is why Castro couldn't meet him or Panamanian President Martín Torrijos.
"...the state of his health was delicate," Correa said. "Later he improved."
Correa visited Cuba from Jan. 7 to 11, and Torrijos from Jan. 3 to 6. Cuban Colada said:

The fact that neither man met with Castro heightened observers' curiosity, because Castro had not written his regular "reflections" for a long time. Also, his message to the nation on Dec. 31, the eve of the Revolution's 50th birthday, had been uncharacteristically short (one sentence) suggesting he was indisposed.

All this confirms my earlier suspicions that Castro's health had deteriorated, as I suggested on Jan. 2. But Castro looked strong in recent photos of him appearing with visiting heads of state.

Links:
Along the Malecon's Fidel Castro page
Posted by alongthemalecon at 7:19:00 PM