Ladies in White protest jailing of loved ones 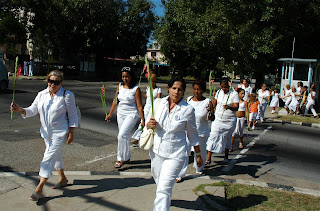 Las Damas de Blanco take to the streets
Cuban security officials disrupted a protest of Las Damas de Blanco earlier this week in Havana, according to Amnesty International.
“The Cuban authorities must stop this continuing harassment of activists who are peacefully attempting to exercise their freedom of expression and association,” said a Cuba expert at Amnesty International.
March 17 was the 6th anniversary of the government's jailing of 75 dissidents, journalists and pro-democracy activists. Las Damas de Blanco - or Ladies in White - are relatives of those who remain in prison. Government supporters contend that the U.S. government helps finance Cuba's opposition movement.
Posted by alongthemalecon at 7:38:00 AM