Fidel Castro played down talk Tuesday that "Raul's men" were replacing "Fidel's men" as part of the big government shake-up announced Monday.
In a column in Granma newspaper, the former Cuban president said the two officials "mentioned by news reports as the most affected" have not "uttered a word to express any disagreement with the decision" to demote them.
Fidel did not name the two officials, but most Cuba watchers believe he's referring to Carlos Lage and Felipe Perez Roque. Fidel implied that the two were removed because they did something wrong. He wrote:

The sweetness of power for which they had made no sacrifice awoke in them ambitions that led them to an unworthy role. The external enemy was filled with illusions about them. 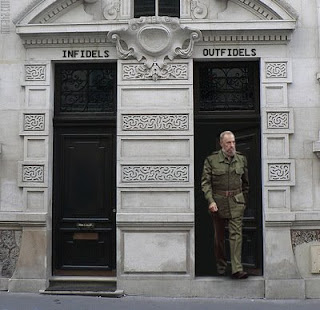 I spotted this clever photo illustration on The Cuban Triangle. It also appears on a blog called TYWKIWDBI and other Web sites. I don't have any credit information.

Hey Mr. Eaton, is this photo recent? if so, it's the first time in a while that I've seen Fidel not in his usual leisure suit/track outfit

It's got to be an older photo of Fidel. And I think it's a photo illustration. It looks like the picture of Fidel may have just been dropped into the picture. Photoshop at work...