What is Jorge Castañeda smoking? (Updated) 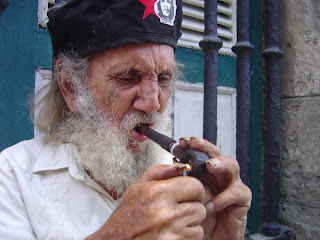 This is not Jorge Castañeda. But the man is puffing...

Jorge Castañeda's March 14 column in Newsweek claims that Carlos Lage and Felipe Perez Roque were fired because they were tied to a plot to force Raul Castro from power. It's an intriguing idea, but Castañeda's column is not convincing.

Castañeda does not provide any evidence for his theory. He writes:

...there are solid reasons to believe that something along the following lines took place: for at least a month or so, Lage, Pérez Roque and others were apparently involved in a conspiracy, betrayal, coup or whatever term one prefers, to overthrow or displace Raúl from his position. In this endeavor, they recruited—or were recruited by—Venezuela’s Hugo Chávez, who in turn tried to enlist the support of other Latin American leaders, starting with Leonel Fernández of the Dominican Republic, who refused to get involved.

Their reasons for wishing to unseat Rául were mainly turf and power...

Now maybe Castañeda's claims have some truth to them, but the former Mexican foreign minister does a lousy job backing up his argument. He doesn't explain his "solid reasons."
Conspiring to remove Raul Castro would be a capital offense, but Cuban authorities don't seem to be treating this as that kind of case, at least not so far.
Update: A CNN story quotes Cuba experts who question whether Castañeda's story could be true. Castañeda says he has no proof for his hypothesis. So why did he put the story out there? What are Castañeda's motives?
Posted by alongthemalecon at 9:23:00 PM