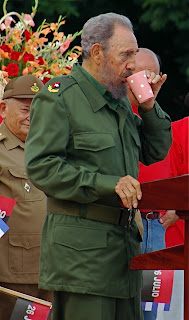 July 26, 2006 - Anniversary of the Moncada attack, the start of the Cuban Revolution

When Fidel Castro journeyed to Bolivia in 1993, admirers swarmed his hotel, yelling "Fidel, Bolivia is with you." London's Independent newspaper reported:

From a window in his five-star hotel, Castro raised a cup of coca-leaf tea, a traditional remedy for the effects of the city's 12,000-foot altitude, and shouted back 'Cuba is not alone.'

To be sure, Fidel Castro is a tea aficionado, though I doubt he drinks the coca variety that often these days.
Before dropping from public view in 2006, Fidel Castro told crowds that he drank tea to soothe his throat. Makes sense. I once saw him speak for more than six hours in Santiago de Cuba. A little lubricant can't hurt. 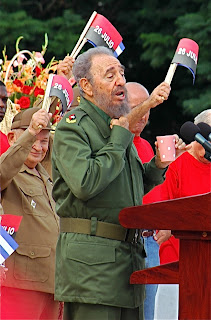 Above, then-President Fidel Castro explains that he is drinking tea for his throat. Note the proper position of the pinky. He made his last two public appearances on this day before he was rushed off for emergency intestinal surgery.

American intelligence agents have evidently known about Castro's penchant for tea for many years. In a story last year, the London Telegraph said:

The former head of Cuban intelligence and Fidel Castro's bodyguard once claimed that his records showed there had been 638 assassination plots against his president.

While the planned use of an exploding cigar is perhaps the most well-known attempt on Castro's life, others have been just as eccentric. The CIA once sought to capitalise on Castro's love of scuba-diving and kill him with an exploding mollusk.
The CIA also prepared bacterial poisons to be placed in Castro's handkerchief or in pills in his tea and coffee, but the plans were abandoned when the pills failed to disintegrate in water during tests.

Links:
638 Ways to Kill Castro, a British documentary
Along the Malecon's Fidel Castro page
Posted by alongthemalecon at 7:27:00 PM