A concrete giant rises above the Havana skyline 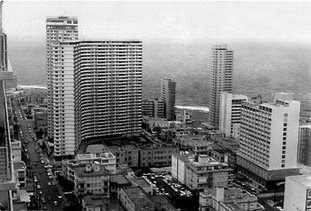 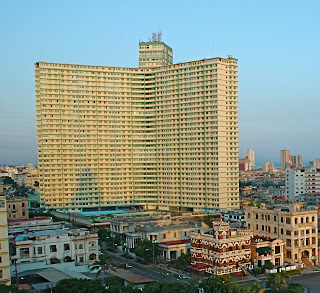 If I could travel back in time, I'd go to Cuba in the 1950s. I would have loved to have seen 1958. But if I were there a little earlier, say June of 1956, maybe I'd see the grand opening of the imposing 39-floor FOCSA building, one of Havana's lesser known landmarks.
The building is a few blocks from the Hotel Nacional and "is considered one of the marvels of Cuban engineering," the Real Cuba says. According to the blog, the FOCSA in 1956:
* Had 39 floors - 30 for apartments and 9 for multiple use.
* Had a movie theater, stores, supermarket and even a TV studio - I'm not sure all this is still there.
* Stood 397 feet high.
* Was the world's second tallest concrete building
FOCSA stands for Fomentos de Obras y Construcciones S. A. It takes up an entire block and is bounded by 17, 19, M and N streets in El Vedado. Below is a photo of the building shortly after it opened. 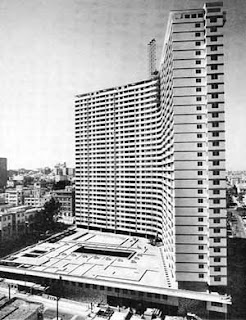 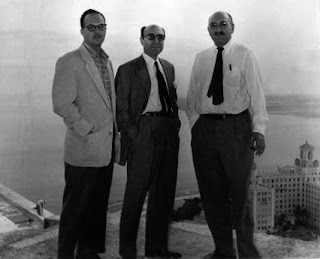 At left is the building's architect, Ernesto Gómez-Sampera, the Real Cuba says. A reader e-mailed to say that the person in the middle may be Luis Saenz, founder of Saenz, Cancio & Martin, a structural engineering firm. Architect Martín Domínguez is at right. You can see the Hotel Nacional in the background.

Cubans tell me one thing that was remarkable about the FOCSA building is that it was a self-contained community with living quarters, shopping and more. Not that you'd want to, but you could stay there and never have to leave.

This brochure, which I took from the Real Cuba site, shows a three-bedroom apartment that went for 21,500 Cuban pesos.
The building deteriorated over the years and its upper floors became nests for vultures, Lonely Planet's Havana guide says.
In October 2000, one person was killed and at least three were injured when an elevator at the FOCSA plunged to the ground, the Associated Press reported. As I recall, workers began renovating the building not long after that. The work went on for several years before the job was done. WikiMapia says the building now contains 370 apartments. Other Web sites say 373. What I can tell you for sure is that the place is big - it's a concrete giant.
Posted by alongthemalecon at 5:48:00 AM