"Cuba Transition Coordinator" makes transition of his own 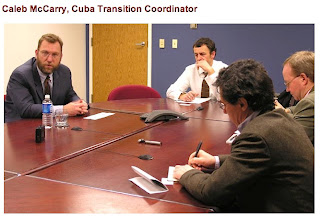 In 2005, the White House appointed a "Cuba Transition Coordinator." His name was Caleb McCarry.
“My mission is to get up every day and think about helping the Cuban people free themselves from the dictatorship,” the former Capitol Hill staffer told Larry Luxner, publisher of CubaNews. McCarry said:

...I am the senior U.S. official in charge of this effort, planning for U.S. support to encourage and then assist a genuine transition to political and economic freedom for the people of Cuba."

The appointment of a "transition coordinator" who vowed to "hasten" Cuba's transition infuriated Cuban officials, who called McCarry the wanna-be "governor" of the island.
"Surely he will receive a juicy salary in his new job, but Caleb McCarry, I assure you, will retire without setting foot in Cuba," then-Foreign Minister Felipe Perez Roque told me and other reporters gathering in Havana.
McCarry did leave his post, but he didn't exactly retire. He is now a senior associate at Creative Associates International in Washington, D.C.
McCarry, a graduate of the University of Massachusetts at Amherst, works in the office of Creative Associates' President Maria Charito Kruvant, according to this announcement. 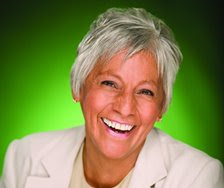 Charito Kruvant. Source of photo: Creative Associates International
Kruvant is a hard-charging woman with a fascinating background. She was born in Bolivia, raised in Argentina and started Creative Associates in the basement of her home in 1977, according to the Washington Post.
By all appearances, she is powerful and well connected.
In 2003, the Center for Public Integrity said Creative Associates was "the 11th largest recipient of government-funded contracts in Iraq and Afghanistan." An article posted on CorpWatch said:

In addition to its USAID contract for educational reform in Afghanistan, worth at least $60 million, Creative was awarded a USAID contract in March 2003 for educational development work in Iraq. That contract, which may be extended by two years, is meant to cover everything from desks and blackboards to textbooks, curriculum reform, academic standards and teacher training and is worth up to $157 million.

"We work in areas where conflict is about to end and turmoil is about to begin, and we love it," Kruvant told the Washington Post.

So in case you were wondering what happened to Cuba Transition Coordinator Caleb McCarry, he's still working in and around the Beltway - at Creative Associates International.
Posted by alongthemalecon at 1:34:00 PM