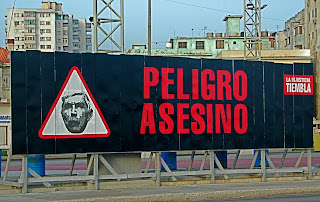 Danger: Killer
A billboard in Havana
Luis Posada Carriles, a.k.a. Bambi, isn't allowed to leave his Miami home from midnight to 6 a.m., according to a federal court order signed this week.
Posada Carriles, accused of plotting the assassination of Fidel Castro, lives with his wife in Miami, records show. He must allow electronic monitoring to enforce the midnight-6 a.m. curfew and can't have contact with any of the men accused of helping him enter the United States illegally in March 2005, the court order said.
Prosecutors accuse the 81-year-old of immigration fraud and other crimes. He is scheduled to go on trial on Aug. 10 in El Paso.
Some call Posada Carriles "the Osama bin Laden of the Western Hemisphere." That seems like a stretch. Posada Carriles is no choir boy, but Osama bin Laden is a far greater threat to humanity. Still, California professor Marjorie Cohn believes it's a fitting description.
Posada Carriles, Cohn wrote in this 2007 article, "boasted of helping to detonate deadly bombs in Havana hotels 10 years ago."
She wrote:

Declassified FBI and CIA documents at the National Security Archive reveal that Posada was the mastermind of a 1976 bombing of a civilian Cuban airplane that killed 73 people. He escaped from a Venezuelan prison where he was being tried for his role in the first in-air bombing of a commercial airliner.

Cohn is a professor at Thomas Jefferson School of Law in San Diego. She's also author of the book, Cowboy Republic: Six Ways the Bush Gang Has Defied the Law. 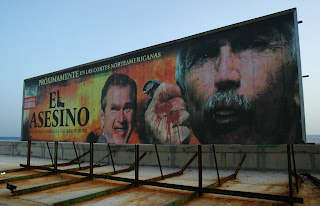 A mock ad for a nonexistent movie called El Asesino, which means killer or assassin. Coming soon to a theater near you...George Bush and Luis Posada Carriles
This is one of more inflammatory billboards I've seen in Cuba. It used to stand along the Malecon, near the U.S. Interests Section in Havana. But it has been taken down.

Certainly many Cubans regard Posada Carriles as a dangerous character. Venezuelans are also wary of him and have asked that the United States extradite him to the South American nation to face charges in connection with the plane bombing.
Lawyers for Posada Carriles have said they fear he would not get a fair trial if extradited to Venezuela, where President Hugo Chavez is a close Fidel Castro ally. They also worry he could be tortured. 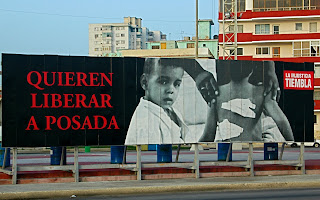 The billboard reads: They want to free Posada

Putting aside the "official" narrative from Cuba, consider this:

This senseless act has been milked by the regime for maximun political purposes. Why wouldn't Castro permit the plane to be raised for inspection? Why do you never read about the expert who clears Posada, the very same expert who solved the Lockabee case. What about the fact that he was twice tried and acquitted for lack of evidence. What about the evidence that Monkey Morales met with Cuban DGI agents in Mexico and collected $18,ooo in cash, and a plan for bombing a Cuban airliner. He later declared under oath the he had been involved and set up Bosch and Posada. Fidel Castro is the granddaddy of modern terrorism and plane hyjackings, who has murdered thousands of Cuban citizens. He hates Posada and I believe he is responsible for this crime. Shake off the lynch mob mentality and think about it.

There is a lot of evidence attesting to Posada's innocence if you look for it. No doubt that President Obama, sympathetic to the socialist cause will happily sell out this hero using Cuban manufactured evidence to do so. It stinks.

Ziva,
Thanks for your comments. I want to learn more about the case. No doubt, it has been milked for political purposes.
Another reader suggested I read Felix Rodriguez's "Shadow Warrior" and so I bought that on Amazon and am waiting for it to arrive.
Any other recommended reading?
As for President Obama, he ought to let the courts handle the Posada Carriles case and keep politics out of it.
Mixing politics with the courts only hurts the integrity and credibility of our judicial system.
Tracey
P.S. If you have any interesting documents on the Posada case, feel free to e-mail me at:
maninhavana@yahoo.com