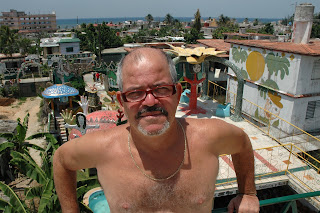 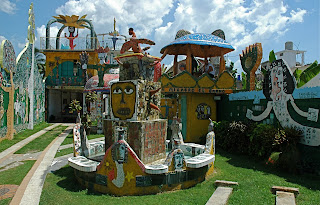 Fuster's fantasy land
A Reuters story features one of my favorite Cuban artists, Jose Fuster. It's an entertaining read and begins:

From his second-story studio, Cuban artist Jose Fuster looks out over what he has wrought in the seaside village of Jaimanitas and, with a big smile, says, “I am completely crazy.”
Below, wildly colorful mosaics and large, fanciful sculptures cover his home and fill his yard in an explosion of art that has transformed the humble neighborhood into a island of brightness among Havana’s well-worn suburbs.

Fuster also jokes about his penchant for Cuban rum, telling Jeff Franks, the Reuters reporter, "I am always drinking." The story continues:

After a sip of seven-year-old Havana Club, he savors it with eyes closed, then says, “Que rico” (How delicious).

Yep, that's the Fuster I know. He's a generous and hard-working guy whose "Fusterlandia" grows bigger and more popular every year. 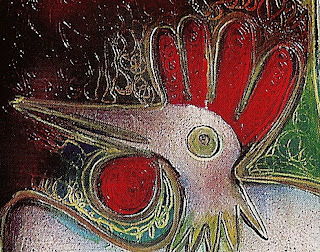 One of Fuster's trademark roosters
Links:
A series of photos I shot at Fuster's house
Jose Fuster'sWeb Web site.
A story I wrote about Fuster in 2009. It appeared in Larry Luxner's CubaNews.
A 2004 Dallas Morning News story about Fuster.
Posted by alongthemalecon at 10:07:00 AM