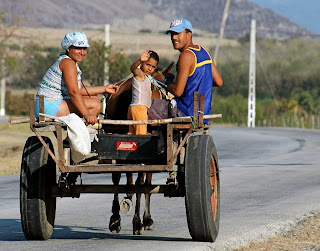 Cuba is a nation divided and there's heartache on both sides of the Florida Straits. Now imagine not being able to visit your sick grandmother who lives in Havana. Or being told just how much money you can send to your relatives in Cuba. That's how it was under the Bush administration.
Kudos to Barack Obama for loosening restrictions on family visits and remittances.
''This is a reaching out to the Cuban people,'' said White House spokesman Robert Gibbs, who was quoted Monday in the Miami Herald.
''This policy extends a hand to the Cuban people,'' said Dan Restrepo, a special assistant to the president who announced the changes in Spanish.
Obama's new rules will, among other things:
* Lift all restrictions on transactions related to the travel of family members to Cuba.
* Remove restrictions on remittances to family members in Cuba.
* Authorize U.S. telecommunications network providers to enter into agreements to establish fiber-optic cable and satellite telecommunications facilities linking the United States and Cuba.
In a statement, Obama also called on Cuban officials to reduce fees on cash remittances. The Cuban government now imposes a 10 percent surcharge on exchanges of American currency. The value of the dollar in Cuba drops even further - to around 80 cents for every Cuban convertible peso - once the exchange rate is taken into account.
Links:
White House fact sheet on the new regulations
Latin American Working Group statement
The Havana Note on other steps Barack Obama could take
Posted by alongthemalecon at 6:22:00 PM