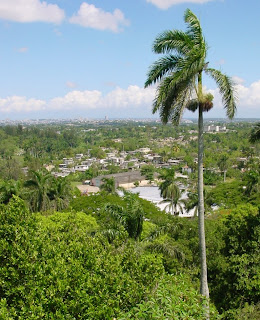 The view from Finca Vigía, also known as Lookout Farm. Workers built the house in 1886 on a hillside near Havana. American writer Ernest Hemingway lived here from 1939 to 1960. During that time, he wrote For Whom the Bell Tolls, The Old Man and the Sea, A Moveable Feast and Islands in the Stream. 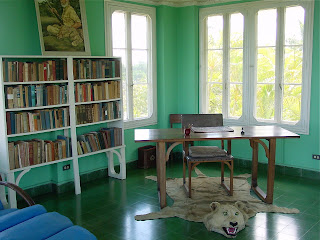 Hemingway could see the Cuban capital from this room. 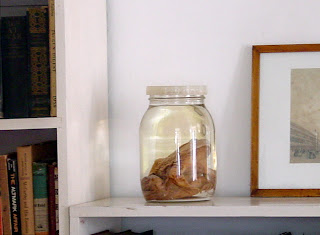 Next to Hemingway's books, a creature in a jar

When the Cuba travel ban is lifted, American tourists will likely swamp Ernest Hemingway's old country estate, Finca Vigía, near Havana.
Over the past several weeks, California travel writer David Lansing has been blogging about Vigía and other Hemingway haunts.
In one post, Lansing says that a Vigía guide two years ago tried to persuade him that Hemingway died of cancer, not a self-inflicted shotgun blast to the head.
For many Cubans, he says, Hemingway was part of a holy trinity that could do no wrong. Lansing explains:

Fidel is the Holy Father, Che is the martyred son, and Hemingway is the mysterious but powerful Holy Ghost.

Two years after that trip, Lansing said he returned to Vigía and found that some things had changed.

...the same guide I’d had two years ago readily admitted that Papa drank like a fish, had “many, many problems with his head,” and killed himself.

“Really?” I teased her. “He committed suicide?” 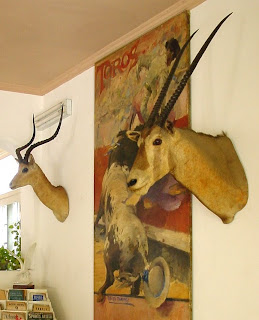 A few of Hemingway's trophies from Africa 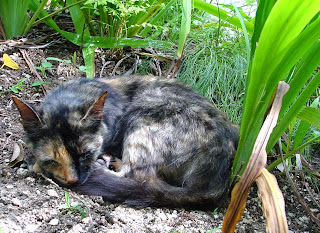 A cat on the grounds of Lookout Farm. This could be a descendant of one of Hemingway's cats. 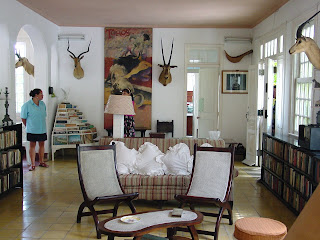 ...Structural problems and damage by the elements have caused the site to deteriorate so severely that experts now call it a "preservation emergency." The roof leaks, foundations are shifting, and the Nobel Prize-winning author's furnishings have been moved into storage for their protection.

Thanks for those beautiful pictures! And the links . . .

thisisnowhere - yeah, now that you mention it, I remember that post...so Marti's the Holy Spirit...

I recently came accross your blog and have been reading along. I thought I would leave my first comment. I don't know what to say except that I have enjoyed reading. Nice blog. I will keep visiting this blog very often.

Thanks very much! That's great to hear. I haven't been posting much lately because my job is keeping me real busy right now. But things should calm down in a few weeks and I plan to post a lot of new pictures. Thanks for your message. Tracey