Is Cuba ready for whipped cream? 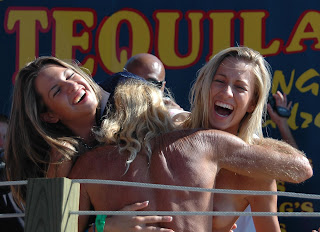 What if hundreds of thousands of American students on spring break invaded Cuba in 2010? 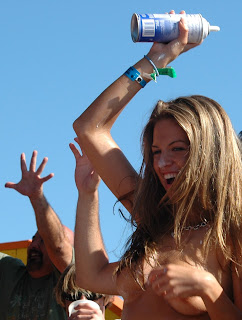 Would Cuban hotels be ready for the revelers, like these students enjoying Spring Break at Padre Island? 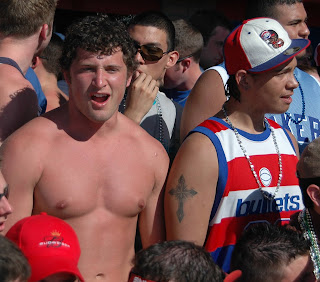 Would there be enough mojitos to go around? 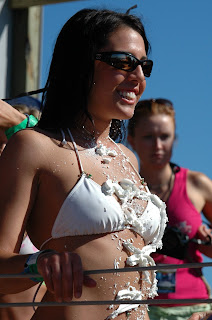 And where the heck would you find enough whipped cream? I've never seen a single can of it in Cuba. "It doesn't exist," one Cuban told me.

Seriously, though, there are serious efforts to loosen or even lift the ban on travel to Cuba.
Some lawmakers on Thursday April 2 plan to push H.R. 874, which would allow all Americans - not just Cuban-Americans - to travel freely to Cuba.

Travel would banned only when:

* The "United States is at war with Cuba"
* "Armed hostilities between the two countries are in progress, or,
* "There is imminent danger to the public health or the physical safety of United States travelers"

H.R. 874 is not a bad start. All Americans should be allowed to travel to Cuba. I say let 'em go even in cases of armed conflict. The United States is about freedom. So let Americans roam the globe at their peril. We criticize Cuban officials for their travel restrictions. Then we tell Americans that Cuba is taboo. That's wrong.
Let's flood Cuba with tourists this summer and throughout 2009. Then unleash the spring breakers in March 2010.
H.R. 874, a.k.a. the Freedom to Travel to Cuba Act, has more than 120 co-sponsors, the Cuba Journal reports.

The two chief sponsors are Bill Delahunt, a Massachusetts Democrat, and Jeff Flake, an Arizona Republican.
The two lawmakers are co-chairs of the House Cuba Working Group. They, along with Cuban-Americans who support their proposal, plan a press conference today at 11 a.m. in Washington, D.C. The Cuban Triangle is an excellent place to go for details on the debate over U.S. policy toward Cuba.

Spring break has come up before in the conversation. During a congressional hearing in September, Delahunt said he once told Fidel Castro about American plans to "invade" the island.

I told Fidel Castro that there would be another invasion, but this time it would be millions of Americans coming to visit the island, and that this time we would win. We had a very special group that we would send down, and that group was the kids on spring break, and he raised his hands and was willing to surrender.

By all appearances, Flake hasn't been quite as friendly with Castro, calling him "a thug." And his wife, Cheryl Flake, lashed out at Castro in this column after traveling to Cuba with her husband in 2002.
I had dinner with Jeff Flake and other members of the congressional delegation and he told me that his message to Castro was clear: "We’re going to lift the travel ban and if you don’t start behaving, we’re going to lift the whole embargo."
Such a move would be the socialist government's "undoing," he said.
I asked whether he thought Castro wanted an end to U.S. sanctions.
"Not a chance," Flake said. "I don’t think he can survive that."
Lift the embargo and opposition to the socialist government "is going to snowball," said Flake, who described Castro as "a thug."
Fidel Castro has denied that he wants the embargo to remain in force, saying that it has caused tens of billions of dollars in damage to the Cuban economy.
Links:
Delahunt press release
Mambi Watch post, including information on similar Senate bill to end travel ban
Posted by alongthemalecon at 12:01:00 AM