Is it mojito time yet? 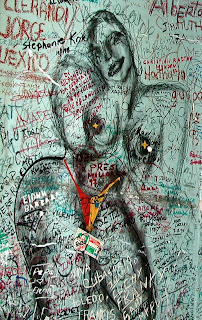 The wall at the Bodeguita del Medio in Old Havana
Barack Obama wants a signal from Cuba, a sign that the socialist government is changing its M.O. Before heading to Mexico today, he told CNN:

I don't expect Cuba to beg. No one is asking for anyone to beg. What we're looking for is some signal that there are going to be changes in how Cuba operates.

According to this AFP story:

Obama called for political prisoners to be released and free speech to be allowed in order to "see a further thawing of relations" between the US and its long-time communist foe. 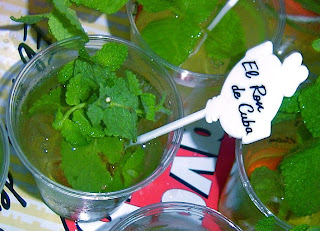 Mojitos
This is not so simple for Cuba. The Castro brothers have vowed to maintain a socialist government. I can't see Cuban officials announcing huge changes or a move to American-style democracy. Cuban officials have said they are on a path of slow, gradual change, not rapid transformation. I'd be surprised to see a mass release of pro-democracy activists, dissidents and journalists who are in jail. But from a strategic standpoint, this looks like an ideal opportunity for Cuba, a great moment to seize on Barack Obama's willingness to change U.S. policy.
If Cuban officials were to release, say, 40 or 50 dissidents and journalists, and take action to improve Internet access, perhaps the Obama administration would further loosen the trade embargo. Maybe that would trigger talks between the two governments and things would snowball. And pretty soon ordinary American tourists would be drinking mojitos in Havana. Who knows?
The Cuban government certainly has enough control over the populace that it can monitor 40 or 50 freed dissidents. Why not give it a shot?
Links:
White House transcript of CNN interview
Cuban Colada - Miami Herald reporter Frances Robles gives her take on Obama's comments
Posted by alongthemalecon at 8:44:00 AM

I can't believe all of a sudden this is playing out so interestingly. I can't stop reading and watching/learning about Cuba now.

yeah, taxes are a bummer

Let's hope Raul does something to reciprocate but we know that his job depends on the Embargo being in place. He and Fidel need the Embargo as an excuse for their failures.

So, they may reciprocate then shoot themselves in the foot on purpose.

Whatever it takes to make the US look foolish is their #1 priority.

I think it's true that the hardliners in Havana and their enemies in Miami and Washington need each other. They are worst enemies and best friends.
I don't get the sense that Cubans shoot themselves in the foot on purpose. I know you can cite examples - the shootdown, for instance. But I am not convinced they do such things to sabotage U.S.-Cuba relations.
It's complicated. Change is difficult. No one wants to change. No one wants to admit any mistakes. And I think Cuban officials fear that if they loosen up just a little bit, then everything will unravel.
Of course, I wouldn't presume to tell the Cubans what they should do. They know what they're doing. But from here, miles away, I can't help thinking that now is the time for a bit of audacity.

I hate to be cynical but the US has changed. Cuba has not.

I'm glad Obama is changing US policy but I don't have too much faith that Raul, and certainly not Fidel, will change Cuba policy.

If Obama and Secretary Clinton are going to wait for a reciprocal gesture, they will probably be waiting for a long time.

Remember the language of the easing of restrictions on Cuban Americans... to affect change in Cuba and wording like that.

Certainly not an openly positive gesture towards Cuba.

Yeah, I agree, we'll have to see what happens. It could be that Cuba won't show that sign that Obama wants. But from the outside looking in, it would seem to be a wise thing to do.

Raul puts "everything" on the table.

Maybe this time it's different?

That is an interesting quote, Rob. To me, it's progress.