Looking for those familiar green fatigues 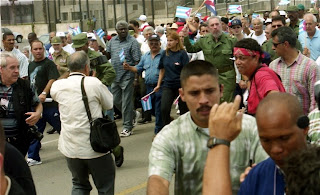 OK, here comes Fidel. Get ready. Don't screw it up. Make sure to use the right lens - and the right camera... 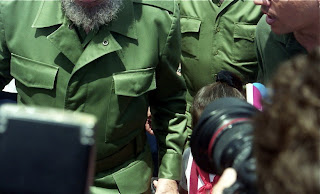 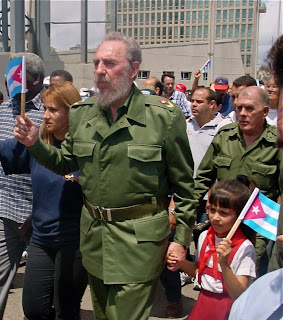 Whew! Got it.
But I could fill an entire blog with photos I've screwed up. Somewhere in my photo archives I have an even better picture of Fidel Castro's fatigues. The photo is so sharp you can see the stitching in the green fabric. Unfortunately, I cut off the Cuban president's head.
When I'm out in the field, I'm usually out there to get the words. I'm there to interview people and write a story.
But I'm passionate about photography, so I almost always try to get pictures, too.
I know many photojournalists who shoot far better pictures than I do. And I'm sure they have fewer messed-up shots. But I'm usually out there with a camera anyway, trying to put on the right lens or see if I can just get the darned picture in focus. 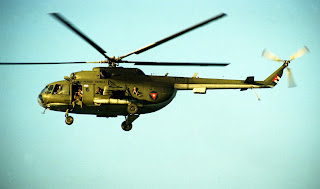 These guys in the helicopter had a much better vantage point. If you click on the picture, you can see them recording the scene.

The event was a huge march demanding the return of Elian Gonzalez, the boat wreck victim who was caught in an international custody battle from November 1999 to June 2000. Those were the days when Fidel Castro himself put on his jogging shoes and led the protests.
Link:
Elian Gonzalez timeline
Posted by alongthemalecon at 11:10:00 AM