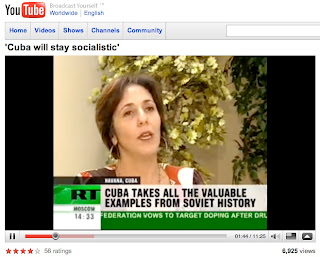 Castro told Anastasia Haydulinam of Russia Today that the Cuban governemnt "lacks maturity. That's why we need to cultivate the mechanisms for people's participation. It's one of the things that preoccupy me most and that will bring about a whole range of other changes."

Castro also she expects great things from the Obama administration. Here's an excerpt from the interview, taken from the Havana Note blog:

Anastasia Haydulina: What do you expect from the new President of the United States?

Mariela Castro: I expect wonderful changes for the world and for the people of the United States. The people of the United States deserve a President like Obama and a first lady like his spouse. They and all of us need civilization and not barbarity. We need intelligent and honest world leaders. I think with Obama's presidency, a whole new era will begin. It will be a totally different story in the U.S. and all over the world.

Perhaps Mariela Castro could invite Michelle Obama to Cuba. Who knows where that would lead?
Links:
YouTube link to 11-minute, 25-second Russia Today interview
Note: A bizarre moment in the clip comes when Mariela is talking about same-sex unions and the Damas de Blanco are shown marching in front of the Capitolio. The Damas de Blanco, or Ladies in White, are the relatives of Cuban prisoners and have nothing to do with same-sex marriages.
Send the First Lady to Cuba blog
White House petition on sending Michelle Obama to Havana
Posted by alongthemalecon at 6:47:00 PM