Massive May Day rallies planned despite the flu 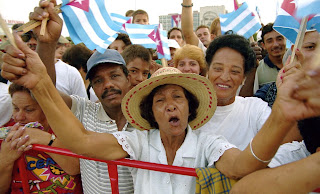 May Day, Havana, 2001
Randy Alonso, moderator of the Round Table program, asked Wednesday night whether Cuban authorities should go ahead with the massive rallies planned for May Day.

Dr. Luis Estruch said the government does not need to cancel its May Day plans because not a single case of swine flu has been reported in Cuba.

Estruch is vice minister of Hygiene, Epidemiology and Microbiology at the Ministry of Health. Cuba's Granma newspaper paraphrased him:

Not a single case of the disease has been detected at this time, and so, as a health professional, I would say that we can all march on the 1st of May, because, fortunately, we have a peaceful, stable country, and there is nothing to prevent Cubans from having events marking this great celebration of workers...

Talk about a decision you had better not get wrong. Making a mistake here isn't just a career ender. Getting this wrong could get people killed. 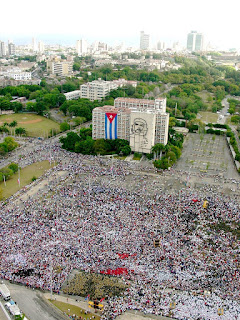 May Day, Havana, 2001
Granma says "millions" of people throughout the country will go to rallies on May Day, also known as International Workers' Day. It's an especially big deal in Cuba this year because it's the 70th anniversary of the founding of Cuba's Union of Workers.
Yoani Sanchez of the Generacion Y thinks the government should postpone or cancel the May Day rallies.

I don’t want to create unnecessary alarm. I don’t know anyone who is infected and an official statement has been released saying that there are no recorded cases of this disease, but remember they told us the same thing for a long time about AIDS, before finally confessing that it had entered Cuba, not to mention keeping secret the number of dengue fever cases each year.

With all humility, I ask the Cuban government to re-think the idea of bringing together thousands of people at this time. Please, show less concern about the spectacle and more protection for the citizenry.

I can't see Cuban authorities canceling unless swine flu cases are detected and it's made public today. 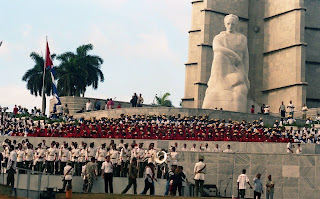