Raul Castro: The ball's in America's court, not ours 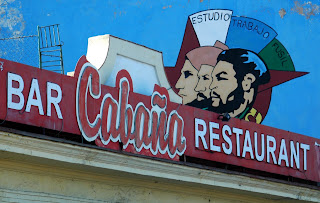 Ah, c'mon. Let's just go have a few drinks
I'm not a communist, socialist or even a Democrat, but I agree with Cuban officials on this point: The onus isn't on Cuba to make the next move. The Associated Press reported today:

President Raul Castro on Wednesday said his country does not need to make any "gestures" toward the United States, and demanded an end to the U.S. economic embargo on communist Cuba.

"Cuba has not imposed any sanction on the United States or its citizens. Cuba is not the one that needs to make gestures."

I agree. Cuba doesn't need to make the first move.
Cuba may decide to make the first move as part of a broader strategy. I've suggested that Cuba release 40 or 50 dissidents and pro-democracy activists as a kind of trial balloon - not a concession to the U.S., but a way to see if Barack Obama is serious about taking a new approach to Cuba. I still think that's a good idea.
For the record, I don't think any of the dissidents or journalists or pro-democracy activists should be in jail. But I don't think it's realistic to think that Cuban authorities are going to release them en masse right now because the prisoners can be used as leverage.
Now, if we assume Cuba is not going to make the first move, then the deadlock will continue unless the United States takes action. The U.S. should take the initiative. The U.S. government has tried to strangle Cuba economically for nearly a half century. The U.S. trade embargo represents the toughest, longest-lasting economic sanctions ever imposed on any country. Bush administration regulations allowed Cuban-Americans to visit their families on the island only once every three years. That was cruel and inhumane. Barack Obama lifted those rules, but the trade embargo remains.
U.S. politicians and lawmakers have been the aggressors for decades. They should be the ones making gestures, not Cuba.
Loosening the trade embargo would give Cuba an opportunity to claim a victory and save face. U.S. officials want to score points, too. Cuba should look for ways to help make that happen.
Each side has to give a little or this thing's going to stall.
Also today, the House Subcommittee on National Security and Foreign Affairs Committee on Oversight and Government Reform held a hearing on the national security implications of U.S. policy toward Cuba. Phil Peters told the committee:

I believe that a shift toward a policy of engagement with Cuba would serve U.S. interests at a time when our influence in Cuba is low and Cuba is at a turning point in its history. If the Administration and Congress were to ease or end travel restrictions, greater contact on the part of American citizens and American civil society would increase American influence in Cuba.