Women played a crucial role in Cuba's armed revolt, giving food and shelter to the insurgents, spying on the enemy and taking care of the injured.
Maria Antonia Figueroa handled another vital, yet often overlooked task: Safeguarding the rebel "war chest" and secretly distributing funds. 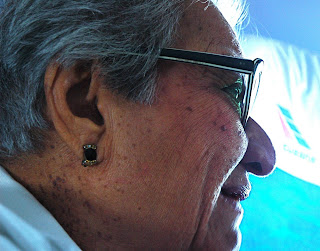 Maria Antonia Figueroa
Figueroa was the treasurer of the July 26 Movement in the Oriente in eastern Cuba in the 1950s. Members of the movement wanted to force out then-President Fulgencio Batista. They attacked the Moncada military barracks on July 26, 1953, marking the start of the revolution.
The attack failed. Fidel Castro and other rebel leaders were captured. Castro was charged with treason and sedition. Figueroa said she visited Castro before his trial began.
"I took his hand and said, 'All the people are behind you.'" 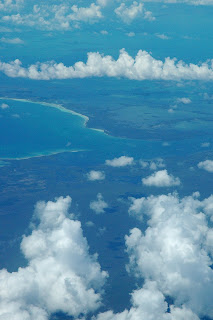 Cuba from above
Castro was convicted and sent to prison. Under pressure, the Batista government later freed him and he went to Mexico to regroup.
During that time, Figueroa said she collected money and delivered it to Castro.
"I brought him the money," she said. "I was the treasurer."
And that suited her fine.
"I detest guns," she said. 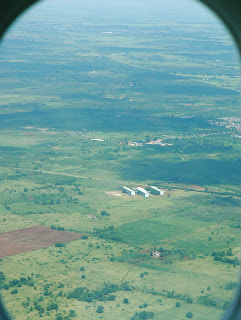 Rural Cuba, a source of many Castro loyalists during the revolution
After the rebel victory in 1959, Figueroa obtained her doctorate degree from the University of Havana and worked in the Education Ministry.
Now 90, she is retired and remains loyal to Fidel. She said they are both revolutionaries. And "we're both Leos."
She was born on Aug. 10 and Castro on Aug. 13.
Figueroa said the U.S. government, which she describes as "the Empire," has mistreated the Cuban people for many decades. But Cubans, she said, have no grudges against Americans.
"We love and sympathize with the American people." 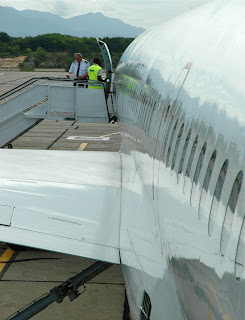 Cubana de Aviacion
Unfortunately, she said, some anti-Castro activists have misconceptions about Cubans' way of life. The "worms," as she calls them, have got it all wrong.
"According to the worms over there, we have nothing to eat. That's not true," said Figueroa, digging into a tray of cold cuts, bread, crackers and cookies.
Ah, yes. I should add, belatedly, an important detail: Figueroa and I were sitting next to each other on a Cubana de Aviacion plane heading from Santiago de Cuba to Havana, and it was time for breakfast.
"American people don't know what really goes on in Cuba," said Figueroa, munching on her breakfast. "They've been misled by the media."
Links:
Short bio of Figueroa in Spanish
The Cuban Insurrection, 1952-1959 - Google Books
PBS' Fidel Castro page
Maria Antonia Figueroa - talking about revolutionary hero Frank Pais, in Spanish
Cubana Airlines passenger reviews
Posted by alongthemalecon at 7:36:00 PM