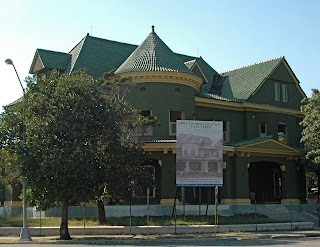 A drive-by photo of "la Casa Verde"
If you're ever out near the tunnel along Quinta Avenida, look for the distinctive house with a green tiled roof.
Two urban legends surround the  83-year-old Havana mansion, according to Juventud Rebelde newspaper:
• A wealthy banker named Jose “Pote” Mendoza Lopez Rodriguez committed suicide in the house, then left it to rot.
• Carlos Miguel de Cespedes, a “cunning and efficient” officer who worked for despotic Cuban President Gerardo Machado, built the house for his mistress, Esmeralda.
As the second tale goes, Cespedes built the green mansion on the west side of the Almendares River so he could see Esmeralda from his house on the river's east side.
Cespedes lived in Miramar Villa, which is now the 1830 restaurant. He was so enamored with Esmeralda’s green eyes that he “became a fan of everything green,” Juventud Rebelde says.
Even while at work at the presidential palace, Cespedes signed everything in green ink. 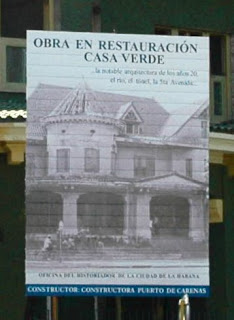 Reconstruction
Both are intriguing stories, but neither is true, Juventud Rebelde says.
Cespedes didn’t build the house. Neither did the banker, although he did commit suicide, hanging himself from a shower pipe on March 27, 1921 - five years before the green house was built.
The real story, Juventud Rebelde says, is that architect Jose Luis Echarte designed the house. The owner was Armando de Armas, also known as Cocó. He worked at the presidential palace for two terms under Gen. Mario Garcia Menocal.
Cocó was the majordomo, also spelled mayordomo. He was a palace official, the chief of the house. He wasn’t a mere butler, bringing whiskey sours to the president.
He was in a position to get rich. Menocal’s administration was known for “rampant growth of corruption and graft,” Wikipedia says. A lot of money must have been floating around.
Anyway, he and his wife took some of that money and went to France. After that, an eye doctor named Pedro Hechavarría and his wife moved in the green house.
Eventually, the couple split up and the doctor moved his practice to Havana’s Vedado neighborhood. His wife stayed in the mansion, but evidently had no money to maintain it. 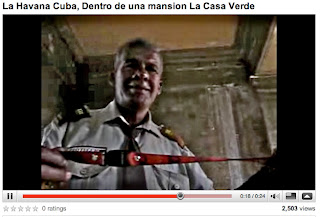 A security guard at the green house
It’s a choice location - Quinta Avenida and Segunda, near the entrance to the tunnel.
Just to the west is Miramar, which is full of mansions that have been turned into embassies, diplomats’ homes, offices and research centers.
But the mysterious green mansion remained for many years, crumbling a bit more each day. 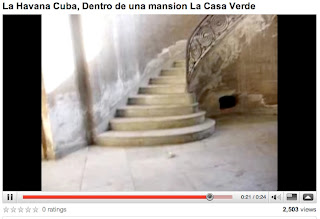 A fleeting glimpse of the mansion's interior
The house is Havana’s only example of German Renaissance architecture. I don’t know how the government plans to use it. I don't know anything about the mansion's last residents, either.
A few clues are on the Web site Panoramio.
In September 2008, someone going by the name joseper72 said one of the last owners was a woman named Luisa. She died years ago and a supposed "niece" named Maria Isabel moved in. Six months later, Maria Isabel died and her sister and mother moved in.
But eventually, they lost the house to the government, joseper72 says.
Someone going by leocubano confirmed that and said Maria Isabel suffered some kind of kerosene-related death. 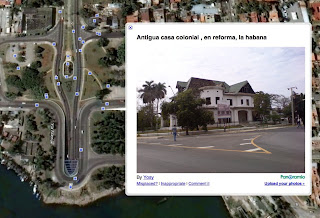 Location, location, location
On the site Postal de Cuba, El Habanero said he when he walked by the house as a child he thought of elves and ghosts lived there.
He said the "little old ladies" who lived in the house showed "dignity and class despite the deterioration of the property" and he hopes God is treating them well in heaven.
Another visitor to Postal de Cuba said daughters of ex-president Menocal once lived in the coveted green house.
I don't know about that, but it's a fascinating story: A poverty-stricken family tries to hang on to a crumbling mansion while authorities wait to seize it.
Links:
YouTube video - gives a fleeting glimpse of the mansion's staircase.
Photo taken after workers removed the home's original pointy roof
Posted by alongthemalecon at 6:31:00 AM