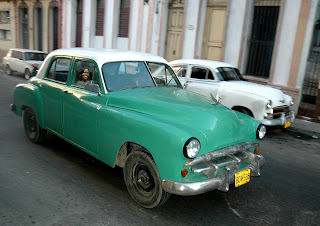 Photoshop: The only way Michelle Obama can tour Havana
I've been rethinking the April 26 New York Times story that said, "The Obama administration is quietly pushing forward with efforts to reopen channels of communication with Cuba."
The April 26 story makes it sound dramatic, but I'm not convinced anything new or different is going on.
The Associated Press says informal U.S.-Cuba meetings are fairly routine. Assistant Secretary of State Thomas A. Shannon Jr. met on April 13 and on April 27 with Jorge Bolaños, chief of the Cuban Interests Section in Washington, the AP's April 27 story said.
Before the April 27 meeting, State Department Spokesman Robert A. Wood told reporters that U.S. officials "have concerns about Cuban policies" and "we'll be raising them."
U.S. concerns rightly include the jailing of dissidents, journalists and pro-democracy activists in Cuba.
Wood said U.S. and Cuban officials would also talk about Barack Obama's recent steps to make it easier for Cuban-Americans to travel to Cuba.
"...Beyond that," Wood said, "I don't have much of an agenda."
Translation: We're meeting with the Cubans because there's public pressure to do so. But we're not planning to do squat.
No change, no action, no fresh initiatives. It's too much of a political can of worms, so let's move on.
So what's next? I have no idea. But a few things wouldn't surprised me:
* The routine U.S.-Cuba meetings will go on.
* All the buzz over Cuba will die down.
* U.S. policy will remain the same, for now.
I suggested a few days ago sending Michelle Obama to Cuba. I still think it's a good idea. Let her see Cuba for herself. Let her meet the Cuban people. If she decides it's not worth pursuing diplomatic relations with Cuba, so be it. Let her take back that message to her hubby Barack.
But I'm convinced she would come to another conclusion.
Personal contact is the key.
A visit to Cuba would give Michelle Obama a taste of the real Cuba, the good and the bad, something she'll never be able to experience by reading a book or a briefing paper.
A visit to Cuba would give the First Lady the courage and the confidence to break off from the pack, speak her mind and set a new course.
So turn her loose.
Let her go.
Let's her do what's right.
And if you like how that sounds, please consider signing the White House petition - Send the First Lady to Cuba.
Posted by alongthemalecon at 10:30:00 AM

I'd like to pass this petition on to others...

I think it's a phenomenal idea.

Yes, please pass it along and spread the word. Thanks!